A little bit of Italy in Great Neck

Cafe Rustica was a welcome surprise. Despite a non-descript locale and suspect marketing, we found this to have some of the most authentic and delicious Italian food in Great Neck

I have to admit, I was a little skeptical about Cafe Rustica. Cafe Rustica was one of those restaurants I’d see pop up time and time again in coupon books and discount Web sites. Not that there’s anything wrong with that, but sometimes if I see too many coupons I start to wonder if a restaurant isn’t desperate for customers. Making matters worse, a cadre of ne’er-do-wells decided to leave one-star reviews at Yelp, dragging its rating to an unpleasant low. I take all Yelp scores with a grain of salt, but I admit the rating did have an effect on my perception going in.

Cafe Rustica certainly was not short on customers the Sunday evening we went. Every table was filled. It was interesting to me that both Cafe Rustica and Sushi Palace (very close to each other) were filled on Sunday nights when other restaurants tend to be on the empty side. I realized that a lot of it may have to do with location. Both restaurants are quite a distance from the main part of town, but then again both are close to a huge concentration of houses and apartments in residential areas. From the looks if it, there were a lot of older couples and families who are probably regulars of these places.

The outside of Cafe Rustica is pretty non-descript. It’s a stark storefront with a forgettable blue awning. But once you walk inside, I was surprised. The ceilings are high and you really do get the feeling of being in an Italian village, with brick walls decorated with greenery and cleverly placed awnings inside that give the restaurant an expansive feel.

We were very quickly served a bread bowl consisting of different kinds of bread, along with a plate of hummus and small pieces of toast. The hummus had a delicious, light flavor with fresh chopped tomatoes, onions, and hard boiled eggs. It was the sort of appetizer that other restaurants might have charged for, but here it was complementary.

We started the evening as anyone should in an Italian restaurant–with some fried calamari. 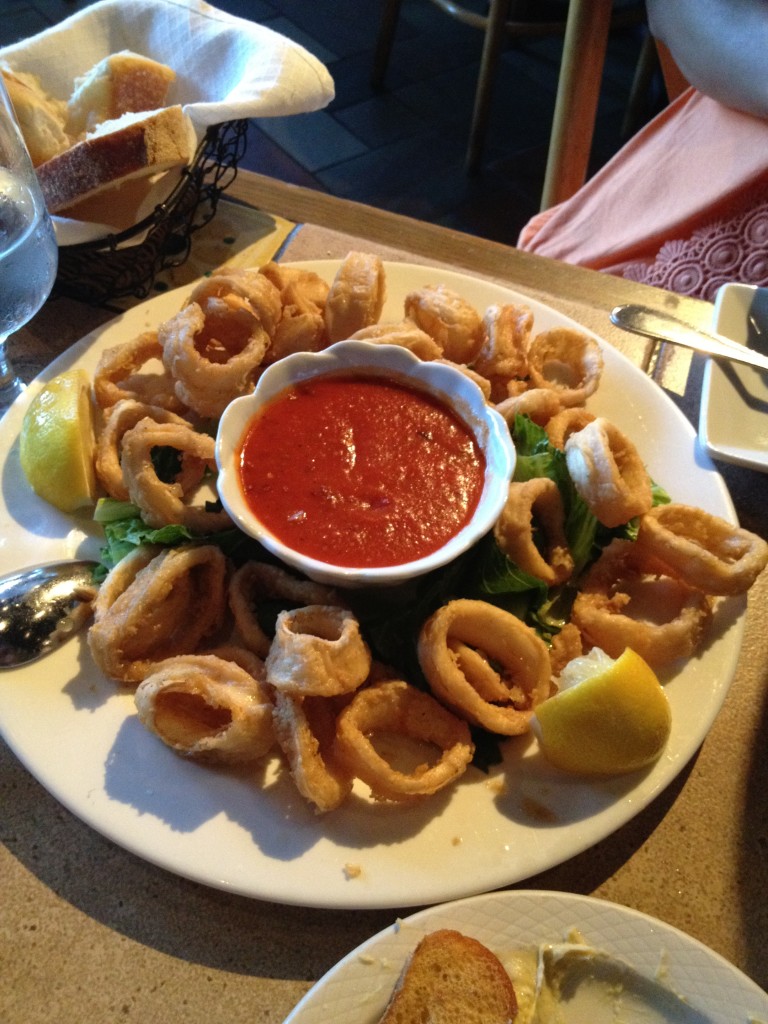 There was the perfect amount of breading, not too thick, not too thin. The calamari itself was fresh and chewy with excellent flavor. So far so good. 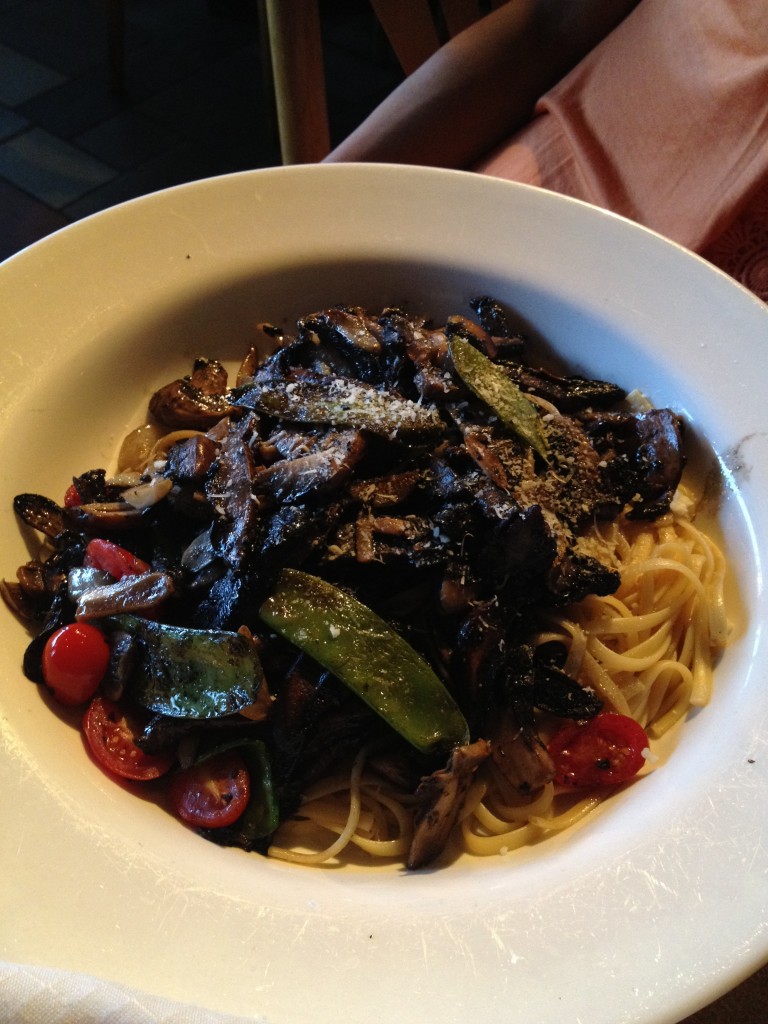 One word came to mind: wow. The pasta was a perfect al dente and lightly seasoned with garlic and olive oil. The mushrooms were roasted to perfection, as were the grape tomatoes and snow peas. They pulled this one off very well.

I ordered the Fruiti Di Mare, which given my terrible Italian I’d translate either as “fruit of the sea” or “fruit of the horse”. 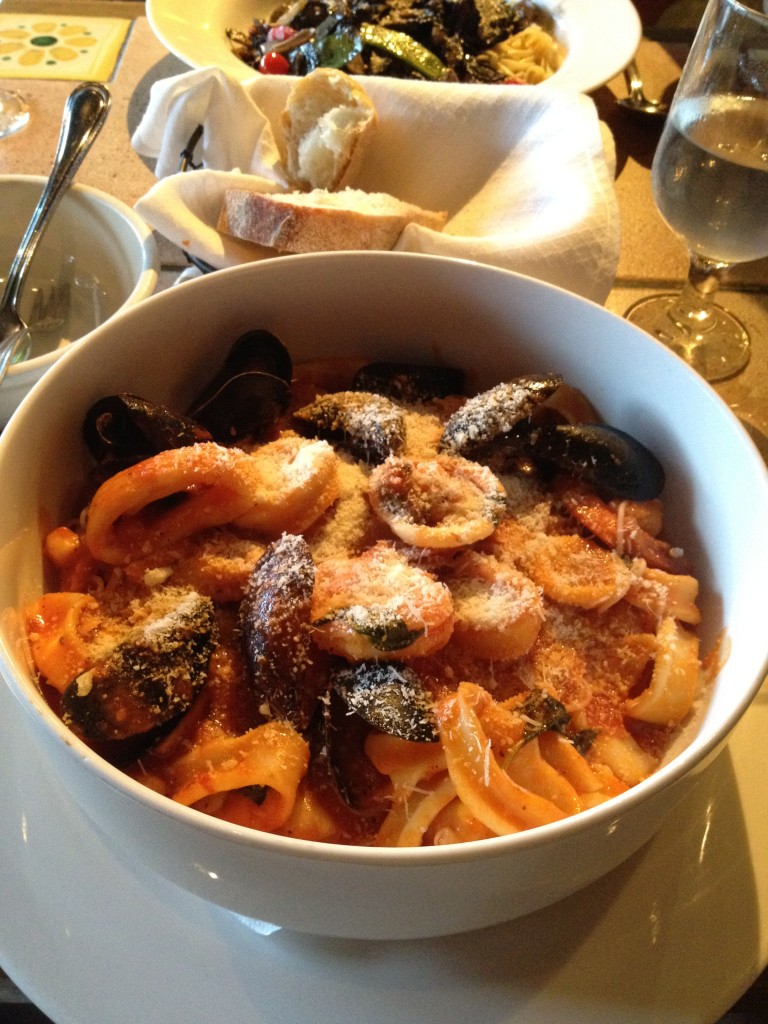 Again, this one was sublime. The marinara sauce was not too heavy but had a fresh flavor that went well with the angel hair pasta. The seafood all tasted exquisitely fresh and had that fresh “pop”. The shrimp was huge and fresh. The scallops were small but tasty, as were the mussels. There were ample portions of the fresh and chewy calamari; I’d ingested so much calamari by the end of the night that I thought I’d turn into a giant squid.

Like any good Italian restaurant the portions were generous. I have no idea why one disgruntled person on Yelp complained about the service, as our servers could not have been nicer or more attentive. When they noticed our table was a little wobbly (even though I hadn’t noticed), they quickly came and adjusted it so it wouldn’t wobble. Water was always full.

It seemed that everyone around us was having a grand old time as well. We saw people ordering poultry dishes, miniature pizzas, and every pasta dish under the sun.

The dishes weren’t cheap: entrees range from $15-30. There is a special gluten-free menu for those with dietary restrictions.

I’m always thrilled when I go to a restaurant expecting the worst and finding the best. I would definitely return to Cafe Rustica again.