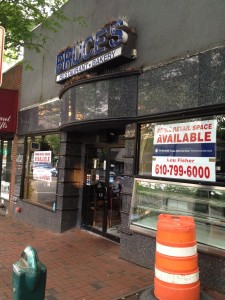 Thanks to KBow for leaving the news on my review of Bruce’s Bakery. It seems that has of June 3, 2012, Bruce’s on Middle Neck Road has closed its doors for good! 🙁

Thinking of Great Neck without Bruce’s Bakery is like thinking of San Francisco without the Golden Gate Bridge or St. Louis without the Gateway Arch. Bruce’s was founded in 1970 and became the “bakery to the stars”. The walls were filled with pictures of and letters from celebrities from Bill Cosby to Tom Cruise to Regis Philbin to Presidents Carter and Clinton. And of course, just about every great you could think of from the New York Yankees. The bakery started in Merrick, moved to Roosevelt Field, and then established itself in Great Neck since 1983. Bruce even had some national TV exposure a year ago with a stint on Cupcake Wars.

Bruce had closed his restaurant in Chelsea a few weeks ago, but little did anyone know that the landmark Great Neck location would be closing as well.

I have to admit, like a lot of you reading this probably do, I feel a big tinge of sadness knowing that those rugelach, chocolate cakes, cookies, cupcakes shaped like frogs, fruit tarts, and so much more are gone. Not to mention the bag of pastries you’d get with your meals. I am happy that I picked up a copy of Bruce’s Bakery Cookbook

before they closed (there are still some available on Amazon

if you didn’t pick up yours in the restaurant), so I can at least reminisce. But of course, nothing beat walking into that store and viewing and smelling the variety of baked goods in the bakery case. By the way, Bruce also put out a follow-up cookbook in 2005, which sellers are offering for a ridiculous price

at Amazon, but for my money his first was still his best.

When I walked by the other day, I peered in the windows and saw that while the restaurant is cleared out and barren, the pictures and memorabilia is still hanging on the wall. Might someone who buys it keep the name and the great history intact? Let’s keep our fingers crossed!

If Bruce is reading this, I just want to say thanks for the years of great memories. I seriously hope someone will buy it and keep it as it should be–one of the best bakeries in all of New York.

3 comments for “Bruce’s Bakery is Closed? Say it Ain’t So!”