Update: Dahlia was kind enough to report that Turquoise has moved to a better location on Middle Neck Road. I actually walked by it a few weeks ago but didn’t put two and two together, especially since there was no sign on the old location, and the new location has a completely different logo and signage. As time permits, I’ll be checking out the new location. Thanks Dahlia!

When I first heard that Great Neck had a seafood restaurant, naturally my mind thought of “seafood restaurants” like Legal Seafoods or Red Lobster, with dishes fried and filled with butter for the western palate.

Turns out Turquoise is nothing of the sort. It’s a decidedly Mediterranean experience, from the service to the food. As for how much you’ll enjoy it, it really comes down to how much you enjoy, say, whole fish that’s broiled versus fish served in “stick” form.

Turquoise is across from the Great Neck Train Station, along the same line of stores that features a Dunkin Donuts and a Radio Shack. It’s a small and simple kind of restaurant, with about 14 tables with paper tablecloths. We went on a Friday night, and it was about half full. Here’s a view from inside literally overlooking the train station: 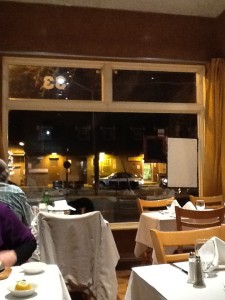 The decor was nice, if understated. The walls were sparsely decorated with model ships and fish, all to put you in that seafood-mood.

The evening started with bread. I’m not sure what this bread was called, but it was crispy and toasty. 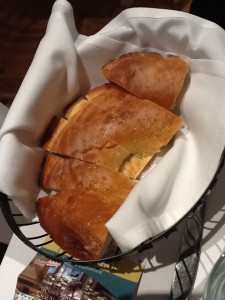 Next, we ordered the crispy calamari for the appetizer. It came out very quickly. 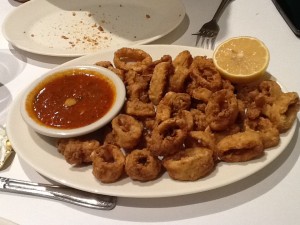 This was super, super hot when it came out. It was definitely very fresh. What looks like marinara sauce in the picture actually tasted a little different than the marinara sauce you’re used it–it was less sweet, a little spicy, and had chunks of fresh tomato, onion, and garlic. Something else we noticed was that all the pieces were round pieces. Overall it was super crisp, the way fried calamari should be done.

As per my tradition, I asked the server what the most popular dishes on the menu were. She pointed to the whole “fish” side of the menu and said they’re all popular, from the Branzino (a kind of Sea Bass) to the St. Peter’s Fillet (Tilapia). She also mentioned that the Greek and Israeli salads were popular.

We ordered both the Branzino and the St. Peter’s Fillet. These took quite a bit longer to come out, but I didn’t necessarily take that as a negative, as they were preparing a whole fish here.

The Branzino came out first (I had to look it up on Wikipedia to get the spelling right, as I had in my notes “bronzino”, “bronzini”, “tobronzini”, “branzini” and every other variation except for the right one). 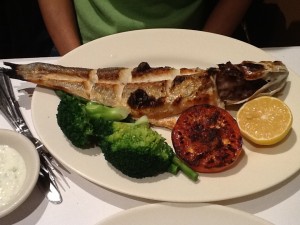 First, I’ll start with the vegetables. The grilled tomato was excellent. It was nicely browned on the outside but inside had a burst of fresh juicy tomato taste. Likewise, the broccoli was perfectly steamed.

The fish itself was very good. The fish fell off the bone nicely and was flaky. The taste was very light, slightly salty and despite what you might imagine by the picture it was “not too fishy”. It was very fresh with a dry texture. I’d say that like most fish prepared in this style, how much you enjoy it is going to be in the eye of the beholder. Those who prefer their fish drenched in butter or drowned in soy sauce may not care for it, but those looking for a light, healthier fare of the kind that they eat around the Mediterranean will eat it up.

The stuffed St. Peter’s Fillet came out next. For those who don’t know, Tilapia is called St. Peter’s Fillet because they say that this is traditionally considered the same kind of fish mentioned in the Bible, in the story where Jesus instructs Peter to pull a fish out of the sea, in which he’d find a coin to pay taxes with. I think this is also the same kind of fish that the little boy with five loaves and two fishes had. After years of listening to that story in Sunday School, I always got hungry, so this was my chance to finally enjoy it!

The potatoes were buttery and light, with a rosemary flavor infused throughout. The fish itself was nicely browned on the outside. Like a lot of whitefish, the fish itself didn’t really have much of a flavor but it was well balanced with their stuffing of celery, herbs, crabmeat, and shrimp. Overall, the flavor of this dish was light as well. And something that appealed to my lazy western preferences–it had no bones. 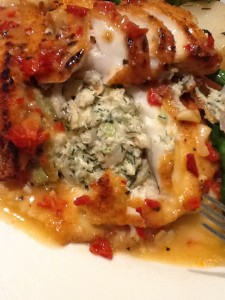 Overall, I’d say Turquoise was one of the more healthy options in Great Neck. I wouldn’t say the flavors were all too bold or memorable, and the prices were a little high for my taste. On the other hand, it’s a rare restaurant in the United States where you can get a whole fish grilled, broiled, or fried, which IMO is the single best way to eat fish (too many Westerners are freaked out by those fish eyes looking back at you).

I’d say it’s worth a try–the ingredients are fresh and the preparation is expertly done. But again, whether you like it or not depends on how much you can appreciate how they ate fish in the “old world”.