More than once I’ve heard people say that Poultry Mart is “The Best Kept Secret in Great Neck”. It’s true, I must have passed by their door on Middle Neck Road a thousand times without even thinking of going in. I mean, I’d see the chicken in the window, but the signage was always so subtle that it never struck me to go inside. 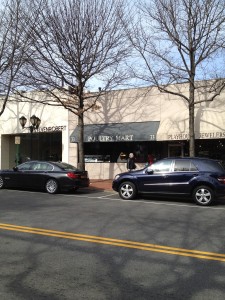 One day, my fiance Lisa (whose arms and legs you’ll occasionally see in pictures on this site) came down with the flu. My first instinct of course was–chicken soup. That chicken soup helps clear colds and the flu isn’t just an old wives’ tale–it actually has scientific backing. After all, the salt and the heat in the soup helps kill germs, the meat provides necessary protein for strength, and the vegetables provide nutrients. At least that’s the story I’m going with.

So, after searching for the best chicken soup in Great Neck, my journey ended up at the Poultry Mart. I went to the counter and asked them for chicken soup, when the man pointed behind me. There, I saw a refrigerator full of plastic container with chicken soup. I grabbed two and brought them to the counter. 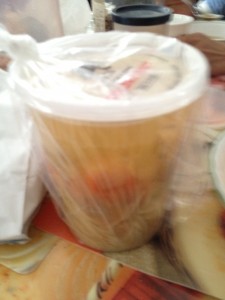 Like the Sirens calling Odysseus, I heard my name being called by these fried chickens by the window. 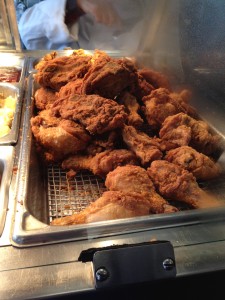 The food wasn’t cheap–I think between the two soups and a few pieces of fried chicken it ended up costing me around $25-30.

I wouldn’t call Poultry Mart a “restaurant” in that it only has two tables–most of the store is taken up by the big deli counter and the aforementioned refrigerators. 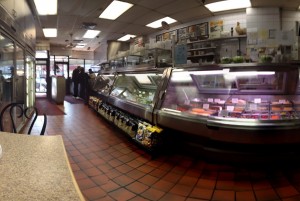 I sat down and partook of the fried chicken. 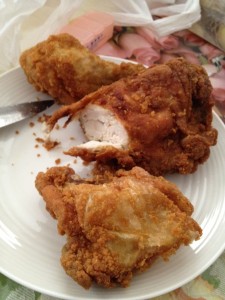 I’ve eaten a lot of fried chicken in my day, but I have to say this was one of the better ones. The batter wasn’t oily nor too floury nor too salty, but it was crunchy and spicy in a way that augmented the chicken’s flavor as opposed to overwhelming it. As for the chicken itself, it was among the freshest chicken I’ve ever had. Ever bite felt like it was fresh and premium meat, unlike what I’ve had at the cheaper fried chicken places. I hear that they prepare the chicken fresh every day.

As for the soup, I tried that when I got home. I just put it in a bowl, popped it in the microwave for a few minutes, and then stirred and enjoyed. 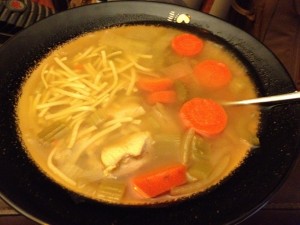 I think the picture says it better than I can. There was a lot of soup, with huge chunks of carrots, and big honking chunks of chicken. The broth was on the salty side, but not so much that you couldn’t taste the rich chicken flavor. It was easily among the best chicken soups I’ve had.

In addition to fried chicken, they have chicken of every kind you can imagine–one reviewer on Yelp was rattling them off like Bubba in Forrest Gump…grilled chicken cutlets, bbq chicken, Hawaiian chicken, Santa Fe chicken, chicken pot pie, chicken nuggets, hot spicy chicken wings, chicken in a pot, boneless chicken, spicy baked floppy chicken, honey sesame chicken. And side from their, they have more traditional deli fare, from Knishes to Matzo Ball Soup. Be prepared to shell out a bit more than you would at Popeye’s or KFC, but remember that you get what you pay for.