Harvest Buffet was one of the first all-you-can-eat buffets around these parts and it’s attained somewhat legendary status. At one point in their history, you heard rumors that there was all-you-can-eat lobster and Peking duck. Just to get it out of the way, the lobster is long gone (replaced by snow crab legs), but the Peking duck is still quacking.

I tend to have the same experience when I visit all-you-can-eat buffet restaurants. I start out thinking that this is the greatest dining experience ever devised by mankind. I end up feeling quite bloated and ill and swearing that I’ll never do what I just did to my body again. I kind of blame it all on my college roommate Ted. Growing up, Ted was the most frugal person I knew. And so going to a buffet restaurant was like a challenge. How much food could you stuff into yourself. Ted had all these bizarre rules. No soda, no bread, no starches. Just head straight for the meat and stuff as much as you can in the few minutes you have before your stomach gets word to your brain that you’re full. Keep stuffing until you’ve gotten your money’s worth. Everything after that is pure profit.

I’m not quite that bad, but I admit I tend to overdo it at buffets. The Harvest Buffet has better quality food that I’ve found at most all-you-can-eat buffets. Of course, that’s like saying that I can run the 50-yard dash faster than most people in their 80s and 90s. But I digress.

One thing I always notice about the Harvest Buffet when I drive by is that it’s always full. The night I went was no exception. 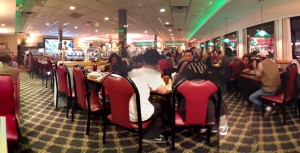 The decor is nothing to write home about. There’s a carpet that looks like it’s in need of replacement, and there are bright red tables and chairs filled with people chatting and eating and getting up for seconds and thirds and fourths. If you want a nice, calm, quiet place to eat, this is probably not the place for you.

The variety of food at the Harvest Buffet is staggering. You have fresh fruit. Right up front you have hot Chinese food like fried rice and noodles, along with western fare like waffle fries. As my friend would say in his conspiracy-theory tone of voice, they put all the yummy carbs up front to get you to fill yourself up with those first. 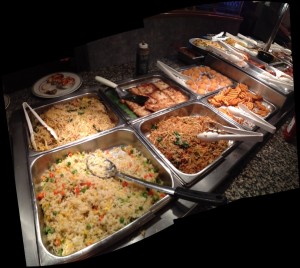 There’s a pretty cool carving station where there’s a gentleman in a chef outfit expertly carving prime rib and duck. 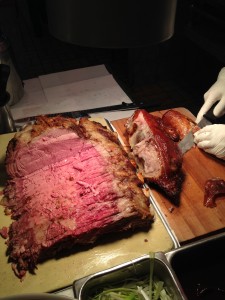 He’ll carve out tiny slivers of beef and duck for you and hand them off to you in a way that seems to imply “this is your quota for the evening”.

I wouldn’t say the duck is authenic “Peking Duck” (which requires a very specific cooking method), but the duck is well prepared with crispy-enough skin. There are also the proper ingredients for you to make a proper duck wrap, the way it’s supposed to be eaten, with a bun to wrap it in, some scallions, and some Hoisin sauce. 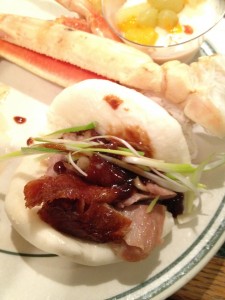 In a sense, I think the server acts both as a professional carver and a security guard. If they were to just leave carved pieces of prime rib and duck without someone carving them out, I think the masses would swoop in like vultures and clean them out in seconds.

Which brings us to the snow crab legs. 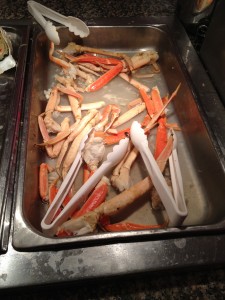 People instinctively know that crab legs are among the more expensive items available, so you’ll usually find swarms of people waiting for the server to bring them out, who’ll then pounce and try to pick the fattest pieces for themselves and their families. This is definitely a tray where the law of the jungle rules.

There are literally hundreds of dishes to try, from chicken wings to roast pork to fried dumplings to stuffed clams to kebobs to broiled fish to oysters to abalone to stir fried shrimp to escargot to ribs to calmari to octopus to chicken dishes to fish dishes. Most are cooked in a Chinese style, although there are certainly Korean, Japanese, American and Italian style dishes as well. Admittedly, by the end of the night they all started to look and taste the same to me. 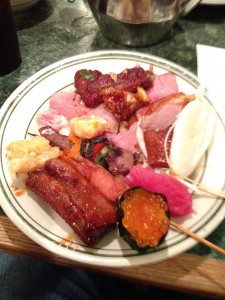 For the health conscious, there is a row of fruit and various kinds of salads, although that row was pretty sparsely trafficked.

I was pretty impressed by the array of sushi and sashimi they had.

Although admittedly I was not very impressed by the taste. If you’re expecting anything close to Daruma or Chez Kama or Miraku, this doesn’t even come close. The salmon sashimi was–I kid you not–still frozen. Overall the sashimi had no taste.

There were a dizzying number of rolls, all marked in English and Chinese. 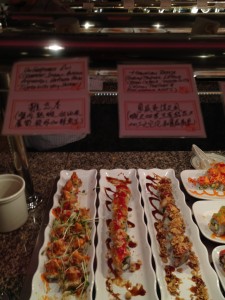 But I’d say this was sushi mostly in name only. I wouldn’t say it was unpleasant to eat them, but as with most of these all-you-can-eat sushi places, it lacked the personality and freshness you’d find in finer restaurants.

One thing that totally impressed me were the Chinese desserts. There was entire wall of traditional Chinese goodies like white jelly fungus (it tastes better than it sounds), cream puffs, puddings, cakes, almond float (my favorite), and a lot more. Not to mention a refrigerator full of delicious fruity drinks and bubble tea (which have to be consumed on site–a fee is required for you to take them to go). 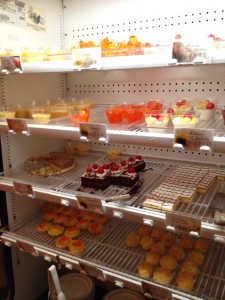 After a while, it’s hard not to start playing with your food. 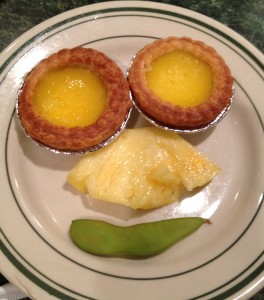 All in all, I think a few years ago the Harvest Buffet was a steal when the price was under $20. Nowadays, they’ve jacked the price up so that the price is almost $30 per adult. As for whether it’s worth it, it depends. Overall, I’d say the food is mostly of mediocre quality, with a few standouts like the duck and the desserts. So if you come here, you’re coming for the quantity more than the quality. I’d say it’s a great place to come with a group of friends who have healthy appetites, want to enjoy a fun night of good conversation (although given the volume of people wanting to come up, you’ll need to limit yourself to 90 minutes at the most), and are happy to have decent food as long as it comes in massive quanities.

Category:Buffet
Price Range: $$$ (around $30 for an adult dinner)
Takes Reservations: No