With so many sushi restaurants in Great Neck, it was only a matter of time before we came to the granddaddy of them all: Daruma of Tokyo. Daruma has a storied history in Great Neck. The story I hear most often about it is that it’s a restuarant frequented by Great Neck’s own Olympians Sarah and Emily Hughes, and that the Hughes family was eating there when Emily got news that she got news she made the 2006 Olympic team. Daruma is also notable for one of the popular vendors at Citi Field (there’s a giant banner signed by the 2000 NL Champion Mets by the front door), as well as having been a caterer to the UN.

Daruma has been in Great Neck for 27 years. Back in the mid-80’s when it started, raw fish was still an oddity. Today, it’s not uncommon to see Daruma filled with families, high school kids, and middle school kids munching away.

I was always a little perplexed looking at reviews on Yelp and Yahoo, where the reviews seems to be either five-stars or one-star. So I decided to try it for myself.

The restaurant definitely has a bright decor. The walls are yellow and the walls dividing the booths are made of wood painted green. Lantern-style lights are bright and light up the restaurant well. 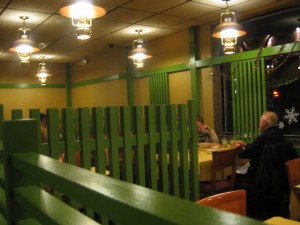 Oddly, the sushi bar itself was empty, but the tables were almost all full, leading me to believe that this is more a hangout for family and friends than a pilgrimage spot for sushi lovers.

Our evening started with a hot towel, which I thought was a fantastic touch. It’s little details like this which a lot of restaurants are dropping or forgetting.

I asked our server what rolls she’d recommend. She pointed out a couple choices on the menu: the Lobster Special, the Ginza, Kanda, and Tani. We decided to go with the first three. She asked us if we were okay with fish eggs, to which I responded “of course”. It was another indication to me that their typical clientele may not be traditional sushi eaters.

Soon afterwards, she brought out a bowl of complementary edamame, which I thought was another really nice touch. 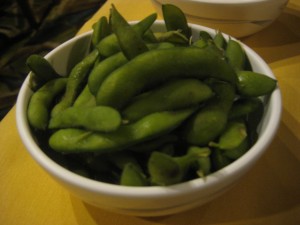 We didn’t have to wait too long for our sushi, maybe about 15 minutes or so. When the rolls came out, they were stunningly beautiful.

The Ginza roll consisted of Chilean Sea Bass (cooked), toro, jalapeno, cucumber, avocado on the inside, held together with thin soy paper. The outside was very interesting–there was a thin slice of kiwi and toro (fatty tuna) on top, topped with a dollop of spicy mayo. 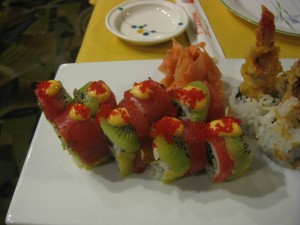 The flavors and textures were very interesting. The textures were a unique sensation of crunchiness and chewiness of the chilean sea bass (which was still warm). The flavor was a unique blend of savoriness and sweetness from the kiwi. Overall, it was not your average sushi, but it was very good.

The next roll was the Lobster Special. 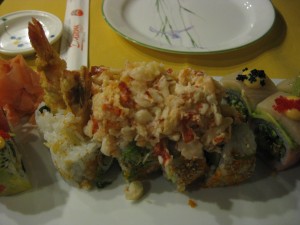 This roll was entirely cooked, with shrimp tempura, cucumber, and kampyo rolls topped with a very generous helping of freshly baked lobster on top. The shape of the roll evokes a giant shrimp (or if you prefer, Japanese sea monster) which was beautiful and playful. The flavor again was very good–the lobster was the star, of course, with large portions of fresh buttery flavor. The texture of the fish eggs and tempura was excellent as well.

Finally, we had the Kanda. 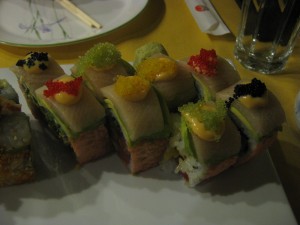 This one took home the prize for being the most gorgeous roll of the night. It was extremely fresh, with steamed shittake mushrooms, asparagus, avocado, cucumber, kampyo and oshinko inside providing a fresh snap and crunchiness. On the outside were yellowtail tuna and dollops of different color fish roe.

One thing clear off the bat is the Daruma still definitely has the most creative and unique rolls out there, as well as arguably the most beautiful.

Through the night, it started to dawn on me why there was such a big dichotomy between reviewers who swore by Daruma versus people who denigrated it. I think it has a lot to do with expectations. Daruma seems to be a restaurant that knows its customers–it knows their tastes, what they like, and what they don’t like. In many ways, the menu is loaded with “Americanized” dishes that please the “western” palate such as shumai and chicken teriyaki, and many of the more popular sushi rolls feature cooked items and “crunchy”.

While the occasional high-falutin reviewer is quick to cast aspersions on this (and in turn, on the people of Great Neck who choose it), I admire Daruma for learning what its customers like and sticking to what made them so popular. The reason they’ve become such a popular place is because they’re familiar, comforting, and aren’t afraid to be unique. I personally found the rolls to be delicious and a wonderful value for the money.

The perennial question will come up: which is the best sushi restaurant in Great Neck? I’ll be honest, from a sushi “purist” perspective, I’d still have give that to a newer sushi place like Matsuya or Chez Kama. But if you’re looking to go out and eat wonderful tasting Japanese food with the family or a group of friends, or just have a casual dinner with a date where you can actually see and hear each other, Daruma is still the place to be. And judging from the crowds I see there every night, it’s still the place to beat.