It took me a while to figure this out, but there are actually two restaurants in one here. “Mangia Bene” (Italian for “Good Eats”) is a regular pizzeria with bright lights and a casual decor, while “La Bottega” (Italian for “The Shop”) is a fine dining experience next door, with dim lighting and tasteful decor (with the possible exception of the rather tacky chef chalkboard where the specials are written). This was the configuration of the original Italian restaurant, Scotto’s, which occupied this space for over 40 years and was a legend in Great Neck (the Scotto Brothers have since gone on to bigger things, opening catering venues like Fox Hollow and Chateau Briand).

We decided to visit La Bottega, using the Groupon I posted here a few weeks ago. In all honesty, most of the time I use Groupons I just take the deal and never come back. But this is once of the first times that I will definitely be back. The food and service were that good.

I’ll be honest, one of the reasons I really can’t stand (or trust) Yelp very much anymore is that a few “elites” from the City tend to swoop in on little poor struggling restaurants and to give them one and two star ratings. While they think they are being so clever, the tragic thing is that while they’re trying so hard to be clever in their writing, they end up damaging a restaurant’s reputations based on the most trivial and isolated things. My experience here was the complete opposite of theirs. In fact, I can say confidently that this is easily the best sit-down Italian restuarant in Great Neck.

When we arrived at the door at around 6:30 on a Friday night, the restaurant was pretty empty. The decor on the restaurant side was classy and evoked a feeling of Old Italy, with accents that evoked the feelign of an Italian market, complete with bottles of olive oil, dried pasta, and gourds. 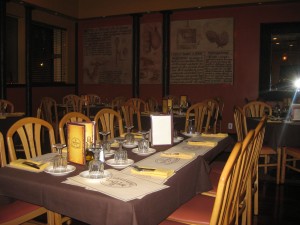 We were greeted heartily by a young waiter who was quite literally the nicest and most enthusiastic (and funniest) waiter I’ve seen for a long time. I really wish I’d gotten his name, because his energy really started the evening on a really pleasant note. I started taking pictures of the restaurant for the blog (surreptitiously, as I never let restaurants know I’m writing a review), but he immediately offered to take a picture of Lisa and me. He also turned on the fireplace for us, which next to the Christmas tree made for a really romantic and toasty setting.

He handed us two menus, explaining that one was filled with Italian words that no one understood, while the other had dishes that everyone could understand. As odd as this sounds, I really appreciated that we were given two menus; too often, I got to uppity Italian restaurants where I can’t tell a primo piatto from a antipasto. I asked him what he’d recommend, and he confidently (and hilariously) told me that when he started working, he only wanted to get paid in Chicken Parmesian heroes, because they were the best in the world. He also mentioned that the Tilapi Capricosa was very good.

That was enough for me. I ordered the Chicken Parmesian platter, which came with a side of pasta (I chose linguini with marinara sauce). Lisa chose her favorite dish, Linguine con vongole (linguini with clams).

We were first served bread. 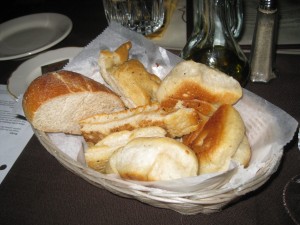 Now as you’ve read in more than one resview of other restaurants, especially ones where the crowds weren’t so big, I’ve often experienced bread to be stale and old. But this bread was piping hot, crunchy on the outside and soft and good on the inside. There was a unique whole wheat roll which challenged my notions of what wheat bread tastes like, and there was a delicious roll with cheese baked on the outside.

Next, we had the grilled calamari appetizer: 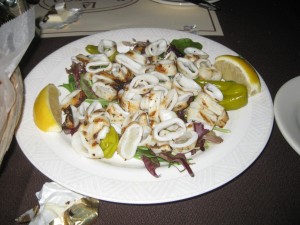 I can’t say enough things about the calamari. It came out warm, very tender, and had an exquisite smoky grilled flavor that I’d never tasted before with calamari. It was served on a bed of greens and had whole jalapenos. The menu said it’d come with a side of pesto, but instead we got a side of marinana, which was fine with me–the sauce was light and fresh. 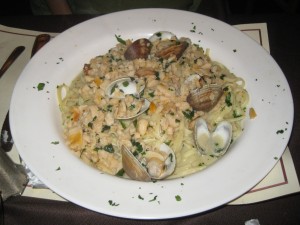 We’ve seen the linguini with clams from Gino’s and from Mario’s before. This one easily outclassed both of them. The flavor was excellent and very light–not loaded down with butter or salt, but seasoned perfectly enough to let the natural flavor of the fresh clams shine through, with a hint of toasted garlic. It came with a generous helping of clam meat, as well as fresh clams which were steaming hot. The pasta was a perfect al dente.

This is what the Chicken Parmesian Platter looked like: 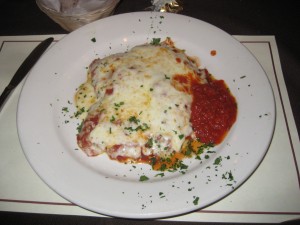 Under the generous portion of mozzarella cheese, the light marinara sauce, and Italian parsley were several breaded chicken cutlets. While our server set my expectations pretty high, I’m happy to say they were met. It was chicken parmesian that was seasoned close to perfection, had an excellent crispy crunch, and went perfectly with the side of linguine.

I was happy to see that as the evening went on, more people started to come in. I think this restaurant may be at a slight disadvantage given its location (it’s way down Middle Neck Road) and the wisenheimers who like to denigrate it based on scant experience. As for me, I’ll most definitely be back.