The former Harvest Buffet has given way to a high-end Chinese restaurant–and it’s pretty good!

I was a big fan of the old Harvest Buffet in Great Neck, but admittedly it was sad to see its slow and steady decline over the years. What had once been a wonderland of lobster claws and crab legs at a ridiculously low price suddenly turned into mediocre fair at a high price. Sadly, they closed their doors in 2013.

But like the Dragon and Phoenix rising from the ashes, a new owner took over the 14 Northern Boulevard location and in 2014 opened Moonstone. They did an amazing job with the decor and the landscaping, starting with their fresh new logo. 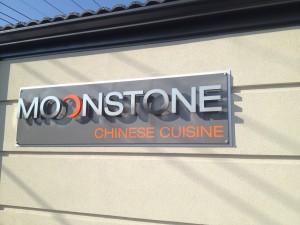 As well as the beautiful Japanese Maples out front. 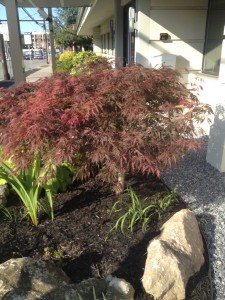 Inside, the excellent decor continued. The place looks like a palace. It’s as if the owners were intentionally making a statement that they’re going to be high class and completely different than what occupied that space before them. 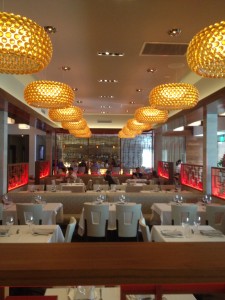 Here’s a panoramic shot from our table. This is not your father’s Harvest Buffet.

And another shot showing some dramatic lighting and a clever design that made us feel like we had privacy even though we were right next to another group. 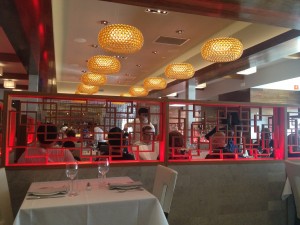 As you can see from the photos, the place exudes class, from the beautiful light fixtures up top, to the gates highlighted in red, to the nice chairs which were both stylish and comfortable. There are ample seats and booths which would make this place ideal for a group gathering. Like a traditional Chinese restaurant, there were tables with white tablecloths. It almost felt like we were in a fine restaurant in the City, not on Northern Boulevard.

Bucking the trend of starting “Asian Fusion” restaurants (which usually means the restaurant is too wishy washy to make a decision of whether to be a Chinese, Japanese, or Thai restaurant so they pretend to be all of the above) Moonstone is unabashedly Chinese.

The menu is cleverly broken into sections with names like “From the Garden”, “Noodles and Rice”, “Dim Sum”, “From the Land”, “From the Sky”, and “From the Sea”.

If you prefer familiar Cantonese-style Chinese dishes, you’ll see a lot of familiar choices on the menu such as Sweet and Sour Pork, Ma-Po Tofu, Beef with Broccoli, Shrimp and Lobster Sauce, Lo Mein, and all your other favorites. But if you’re feeling adventurous, there are in addition to those a huge number of other dishes to choose from, some truly original and innovative. Prices are on the high end for Great Neck, around $20-30 per entree.

You can either order from a prix fixe menu or order in a more traditional a la carte family style. We decided to to do the latter.

As for the entree, the waitress suggested the Beijing Duck, the whole fish, and the clay pot as her top recommendations, so we went with two of those three.

The duck came out first. It came out in a bamboo steamer, and each pancake was already impeccably wrapped, complete with a piece of meat, crispy skin, cucumber, green onion, and hoisin sauce. 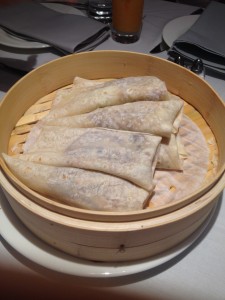 The two legs came separate and were presented just as nicely. 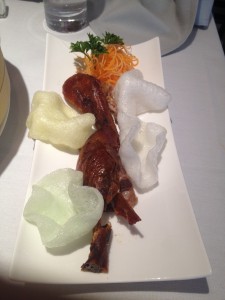 We were deliberately given the duck first because it needed to be enjoyed ight away, but we followed up with our first appetizer, some Hoisin glazed bacon sliders. It came as a plate of thick slices of bacon, along with green papaya and carrots on the side that you form into a steamed bun Korean-style.

While the presentation was amazing, the taste was just so-so. The glaze was a just a bit too sweet for my taste, and I didn’t taste the fattiness that you come to expect in really good pork belly. Still, it was enjoyable.

Next up we went with something a little more traditional–a chef’s steamed dim sum platter. 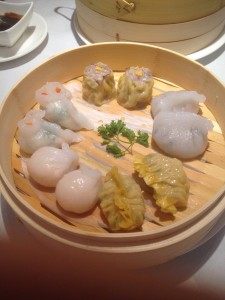 Again, impeccably made dim sum, but a few people at our table agreed it was a bit too “doughy” at times. Still, the flavor was excellent. Granted, you’re paying a pretty hefty premium by having it prepared by a chef rather than thrown at you by a woman pushing a cart around.

Next, we tried some jumbo prawns Szechuan style. 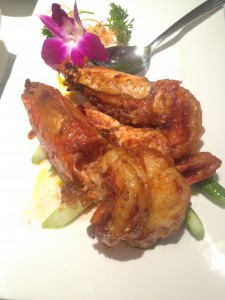 These were huge to the point being a little freaky, like miniature lobsters.They came on a bed of asparagus and the seasoning wasn’t bad. It lacked the “snap” of really, really fresh shrimp, but the flavor made up for that somewhat.

Finally, the clay pot came out. 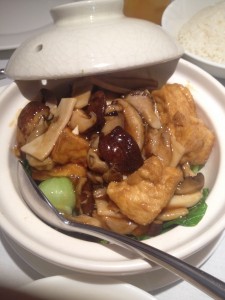 I admit this was the one I had the least expectations for, but it turned out to be excellent. The fried tofu was great, the mushrooms were fresh and tender, and the dish had an excellent, rich  flavor.

The noise level throughout the evening was pretty good. Our friends had brought their baby with them, who slept through most of the meal.

There was a little bit of confusion with the service. We’d asked for a dessert menu, but our waitress brought us the check instead. When we reminded her we wanted the dessert menu she finally brought it to us, and we ordered the crispy banana spring roll. We waited, and waited, and waited for it until it finally came more than 20-30 minutes later. 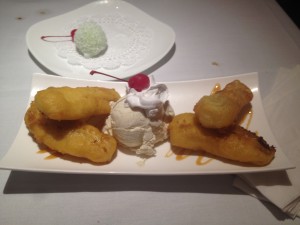 The banana, as well as the honey dew mochi you see in the back, were both very good.  To their credit they acknowledged and apologized for the delay, explaining that “bananas take a while to fry”, and comped us for the dessert (literally a small price for them to pay, $8 after we’d paid about $120 for the meal for four of us).

Overall, I agree wholeheartedly with the New York Times’ review of Moonstone being “very good”. The decor is easily the nicest of any restaurant in Great Neck, despite some glitches the service was excellent, and the food was very good. I’d say at these prices, Moonstone makes more sense as an occasional special treat than a restaurant you’ll eat at every day, but it’s good to see a solid Chinese restaurant back in Great Neck.