420 Northern Boulevard is one of those locations that is notoriously difficult to keep a restaurant in. In 1999 it was Bardi. Then in 2003 it was an Italian restaurants called Brunello’s. Up to 2011, it was Oevo. In 2012 the restaurants at this location was called 420 North. Finally in 2013 Anthony’s Coal Fired Pizza came in.

You’d think with a road with as heavy traffic as Northern Boulevard, plus to the always-sold-out Peter Luger across the street, that any restaurant in this location would do great. Of course, reality doesn’t always match theory. Other than Luger, there really aren’t any “destination” stops along that stretch of Northern Boulevard (case in point–name me any other store or restaurant on that side of Northern). So like Luger, for a restaurant to survive in this place it really, really needs to become a “destination” of its own.

Anthony’s Coal Fired Pizza certainly has a leg up on all that have come before it in that it’s a proven business. It’s not a massive franchised chain like McDonalds, but it does have locations throughout the east coast–all owned by the original company. The founder of Anthony’s, Anthony Bruno, actually grew up in Long Island before his father moved to South Florida in 1982 to start an Italian restaurant. The restaurant became a Fort Lauderdale favorite and is still going strong.

Anthony Jr. may have left the New York area, but the New York area never left him. He introduced the concept of coal over pizza to South Florida, with a goal of creating a great New York pizza outside of New York. His restaurant spread to about 40 locations Florida, Delaware, New Jersey, New York, Pennsylvania, and Massachusetts. His concept was to cook pizzas in an 800-degree oven that produces a “well-done” flavor and crisp crust. His pizzas were picked as the favorites throughout South Florida, from Miami to Palm Beach to Tampa. Among his business partners is none other than Dan Marino himself.

Perhaps the Achilles Heel of any restaurant that’s ever been at 420 Northern is parking. There are only three spots in front of the restaurant reserved for valet parking; you’re on your own to go up and down Northern Boulevard to find an empty space.

We finally found a spot and made it to the restaurant. The first thing that greets you is a big sign with Anthony’s slogan. 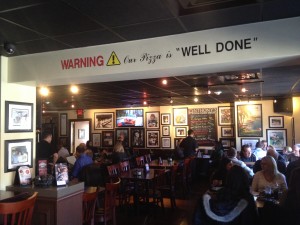 This is both a tagline and a warning. Anyone walking into the restaurant and expecting to find pizza like Grimaldi’s or John’s or Lombardi’s or any of the Ray’s pizza is going to realize that this pizza is different than any of them, for better or worse.

The restaurant is split into two halves with both sides filled with tables for 4 or 6. Each table had an iron ring on it to hold the eponymous pizza on the table. Four TVs around the rooms were showing sports and there were autographed memorabilia lining the walls, no doubt a benefit of an NFL Hall of Famer being a co-owner.

The menu is sort of a higher end version of a typical Italian pizzeria-type restaurant. You have your traditional and specialty pies, of course. There’s “Coal Oven Roasted Chicken Wings”, and “Coal Oven Sandwiches”, including calzones and roast beef sandwiches. Then there’s “Italian Soul Food”, including Ribs, Meatballs, “Eggplant Marino” (named after Dan Marino), and Broccoli Rabe and Sausage.

We asked the server for suggestions, and he instantly said the chicken wings were popular, and made sure to tell us they weren’t spicy; rather, they were marinated overnight with a sweet marinade. When we first got the dish I had a hard time finding the chicken. 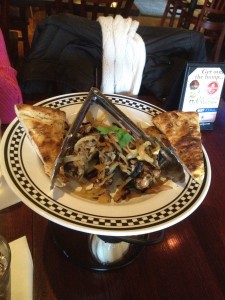 Turns out they were hiding under a sea of caramelized onions. Here’s what one looked like underneath the pile. 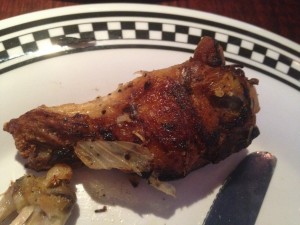 The flavor was actually quite excellent–a delicious charred flavor with the meat infused with the marinade. It was just the right amount of crispiness on the outside but tender and moist inside.

He also recommended the Meatballs. 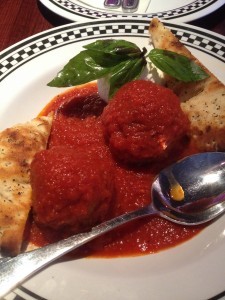 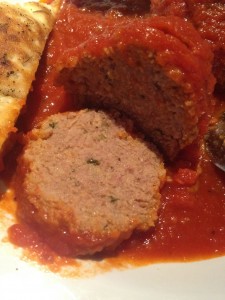 The meatball was certainly moist and tender with a good fresh flavor, and was very good paired with the ricotta cheese, but I honesty didn’t see too much special in it.

But of course, the star of the show was the pizza. We ordered just a regular pie. 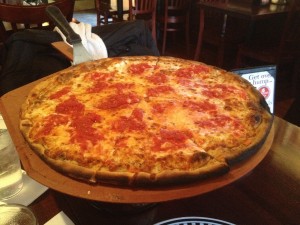 I’ve tasted just about every pizza known to man, but this was a new experience. The sauce on the pizza was fresh with real tomato chunks and that sweet taste you get when you bite into a really fresh homegrown tomato. The crust was exceptionally thin and crispy. The cheese itself wasn’t too special except when you got to the edges where they were baked into a crisp, Cheez-It like flavor.

The one gripe that most people who gripe about this pizza will probably be the “well-done” nature of it, specifically the char on the bottom. 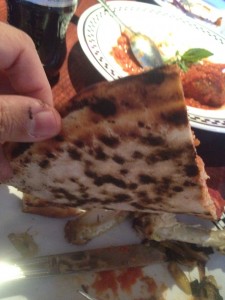 Whether this is a good thing or not will be one of those things that will be in the eye of the beholder. For me, as the son of two biochemists, I tend to shy away from eating too much burnt stuff, and this was certainly a lot of it. But then again, there are certainly those who will fall in love with the char taste.

It’s interesting that across the street, Peter Luger puts their porterhouses under an 800 degree broiler, and here, Anthony’s puts their pizza, wings, and sandwiches under an 800 degree coal oven. In both cases you’ll be experiencing something that we simply can’t replicate at home with our wimpy 475 degree ovens. In Luger’s case that instantly earns them 5 stars; in Anthony’s case, the sensation was more a curiosity than something I’d necessary crave. But it was good enough for me to give it a solid 4 stars. I will be back.