South Middle Neck road is a part of town that’s pretty easily missed. As you’re driving into Great Neck on Middle Neck Road, it’s the small parcel of stores to your right just before you hit the train station (on the other side of the road of the Waldbaum’s complex).

Take my advice–don’t miss it again.

Miraku is a newcomer to the Great Neck dining scene, and it is a winner.

When you enter the store, you’ll get yelled at by everyone in the store. Don’t panic, they’re yelling “do itashimashite”, which means “welcome” in Japanese and is a traditional way of greeting people in traditional Asian restaurants.

My first impression of the decor was that it was very trendy. There’s a trendy sushi bar with a neon blue glow. There are traditional booths to the side of the restaurant, and regular tables in the middle. It’s got a feel that’s both modern and yet traditional (the lighting inside coordinates well with the actual paper lanterns outside, which gives it a distinctly Japanese feel), which is appropriate given that their restaurant serves contemporary Japanese food inspired by traditional dishes. There was some generic Asian-inspired poppy music in the background which added some more atmosphere but was in no way distracting.

They have a full bar, but since I don’t drink all that much I was intrigued by their menu of mock-tails and specialty sodas. They had a number of drinks concocted out of yuzu (an Asian citrus), as well as some intruguing bottled sodas (including pinot noir, chardonnay, and rose sodas). Of course, they also had an extensive wine list as well, as well as an extensive cocktail list with clever names such as Gingered Apple Oolongcha.

As for the food, everything except for a few large dishes and the sushi rolls comes in appetizer size, so I think the best way to enjoy the restaurant is to order tapas-style. They have a number of small bites, skewers, and grilled and fried small plates. And of course, they have an extensive selection of sushi rolls and sashimi.

We asked for some recommendations from our server, who was extremely friendly and knew the menu inside and out. He started us out with edamame falafel, which is something I’ve never seen before (and I am a true falafel fanatic). 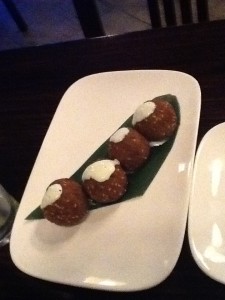 This is one I will definitely come back to get again. The flavor was excellent, I could taste the distinctiveness of edamame but it mixed well with the traditional falafel spices. The outside was a light layer of crispiness, while the texture on the inside was a bit pastier than traditional chickpea falafel, sort of the consistency of mashed potatoes. The contrast worked well, and topping it off was a subtle and slight sweet and tangy wasabi sauce. Overall, this was an enjoyable and light dish that I actually preferred to most of the traditional falafel I’ve had.

Next, we tried the grilled wild mushrooms with truffle oil. 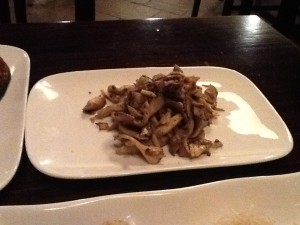 Our third small dish was the homemade shrimp shumai. Our server told us to expect something unique, and we definitely got that. 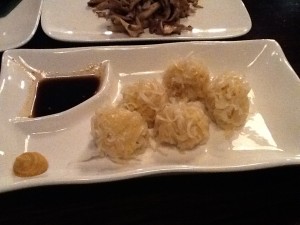 I’ve had thousands of shumai in my life, but this was definitely unique. The outside had of shredded bits of skin which took an old tried-and-true dish and really breathed new life into it. The shrimp inside was extremely fresh, and it came with a dollop of mustard and soy sauce. I like so far that this restaurant really shoots for the stars in terms of creativity, and they seem to hit the mark each time.

We also tried a chicken skewer, the tskune. 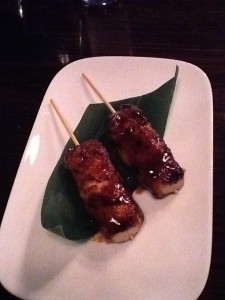 Again, while I was expecting a traditional satay where they just plop a chunk of chicken on a stick and call it a day, I was delighted that this skewer was different. It was pieces of flaky chicken bound together with seasoning. I found the sauce for this a little too strong, but overall still enjoyable.

Finally, we tried the sushi itself. We asked our server for his recommendations, and he rattled off a whole bunch of them. We ended up going with the Rising Sun and the Two Kings. 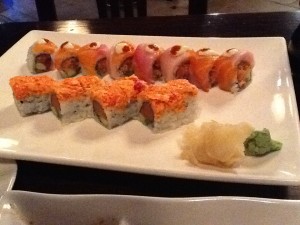 The Rising Sun was definitely the highlight. On the outside were salmon and yellowtail, while in the inside there was crunchy tuna and avocado. The Two Kings was a clever play on words which combined King Salmon and King Crab. The sushi chef is definitely the real deal: Hidebumi Sueyoshi, who previously worked in Hatsuhana and was the opening chef for Shibuya in Las Vegas.

In a town where there’s literally a sushi restaurant on every block, the burning question is, how do restaurants differentiate themselves?

We chatted with Jing, the owner (she didn’t know I was reviewing the restaurant, she was equally friendly to all the other tables), and she told us that her family has been a supplier of fresh seafood to over 250 restaurants in the New York area, so Miraku will definitely always have the freshest fish.

The other way they’ll differentiate themselves is through the creativity of their menu. We had the pleasure of meeting the general manager Richard who was the brainchild behind a lot of the unique dishes.

It takes a lot of guts to open a new Japanese restaurant in Great Neck, but I think these folks have what it takes, the freshest fish around, a unique menu, a friendly and attentive staff, and great decor. As is typical with tapa-style menus, be prepared to pay a little bit more as you sample more dishes, especially if you purchase wine with your meal. But Miraku does not disappoint, and if it maintains its excellence, I’d say it has a chance of being one of the very elite restaurants in Great Neck, which is saying a lot.