Not a stellar dining experience

Every time I drive on Northern Boulevard, I see the “Seven Seas Restaurant” and aren’t quite sure what it is. Is it a gourmet seafood restaurant? A Long John Silver’s clone? A diner?

The answer is the third choice. Seven Seas is a diner, just like what you’d find in the 1960s. Which usually is a good thing, but in this case, it looks like the decor hasn’t been updated since then. While there was ample and spacious seating, the seats themselves looked worn, and the colors looked “retro”, but not really in a good way.

Even the menu looked like it hadn’t been updated for a very long time. Like any good diner, there are a lot of choices, but strangely, it took me a while to find something that appealed to me. Pictures would help, as well as an indication of any specialty dishes. 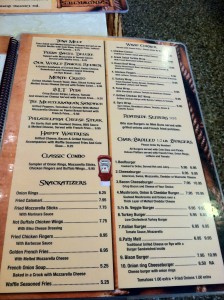 We came at lunchtime on a Monday. I somewhat expected a pretty busy crowd, but there weren’t many people there. Seems that there were a lot of older people, whom I’d guess are regulars who have been going there for years. The best diners I’ve been to are the ones that maintain the “feel” (and clientele) of old style diners, but have since updated their menus, their decor, and their service to suit a younger, “hipper” crowd. I’m not saying turn it into a hip bar, but at least offer a few high quality signature dishes instead of But the Seven Seas appears content to maintain the status quo, one that is no doubt comforting to people who have been going there for years, but really nothing special for the rest of us.

The service was certainly nothing to write home about. The waitress who served us wasn’t rude or mean, but on the other hand she wasn’t particularly friendly or forthcoming either. We were plopped down at our seats and our order taken rather matter-of-factly.

I ordered the Monte Cristo. On the menu, it’s advertised as grilled challah french toast, ham, sliced turkey and melted swiss cheese served with potato salad. Here’s what I got: 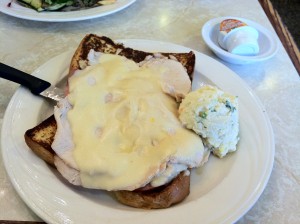 Aside from getting only two bites of potato salad, I was a bit disappointed with both the presentation and taste. The “french toast” was just a soggy piece of bread dipped in egg; the turkey wasn’t quite the portion size I’d expected for a $10 sandwich; and worst of all, the whole thing tasted bland and had no personality. 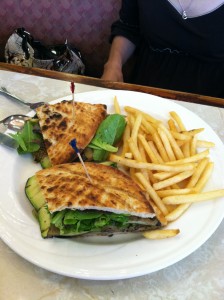 Again, they got the parts right technically, but the whole thing just lacked any taste or personality.

Which in many ways is a good way to sum up the Seven Seas. It looks and feels like a restaurant that’s been there forever, but it also feels like this is so in spite of itself, perhaps because because there just aren’t many other options for diners in that part of Great Neck (especially since Scobee in Little Neck closed down). Still, I was definitely underwhelmed. It seems that everything from the decor to the menu to the service to the recipes for the food could use a bit of an upgrade. I do have to return some time to try their breakfast, which I’ve heard much better things about. But for now, they get a 2 out of 5 stars.