A neighborhood bar that is bar first, restaurant second.

Sip City is first and foremost a bar, with stylish decor and a popular gathering place for young people after work and on weekends. It struggles somewhat as a restaurant, not in terms of the food (which is excellent, high-end bar food), but in terms of service.

Sip City stands at the corner of Cutter Mill Road and Middle Neck Road, right across from the Great Neck LIRR station. Over the years, there has been a revolving door of restaurants and bars at this locations, from Mushrooms, to XO Bar & Restaurant, to The Living Room, to Sports Corner Café to Plaza Madrid. So the burning question is: does Sip City have what it takes to make it?

This review will focus on Sip City as a restaurant. Given its name, Sip City is obviously first and foremost a bar. As a bar, it seems to be pretty popular. On Friday nights when I walk home from the train station, it always seems pretty full of life. 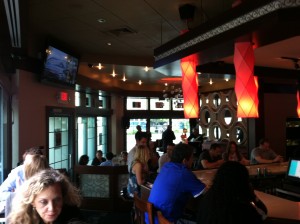 So far I’ve been to the restaurant twice for dinner outside of the popular “bar” hours. Both times the restaurant was not close to being full. And yet both times they had a live singer whose microphone was turned up perhaps a bit too high for the sparse crowd. The first time I went the singer was a dead ringer for a middle-aged Frank Sinatra. The second time the singer was a young lady whose voice was nice enough for a few songs, but after the ninth or tenth song I had enough (especially with the speakers blaring as they were).

As for the level of service, I was not very impressed either time. The first time, service was fair, but still pretty slow. The second time was a bit of a disaster. We walked in the door and waited at least 5-7 minutes to even be acknowledged. We were finally seated, but weren’t given menus until at least 10 minutes later. After we ordered the food, we waited 40 minutes for our food, and our water glasses were empty most of the night. There was one person who seemed to be doing everything–seating people, waiting on tables, and being the busboy.

It’s a bit unfortunate that the service was so shoddy, because from a food perspective, Sip City is not bad at all. At a Great Neck street fair last year, we had the Singapore Street Noodles and the Lobster Rolls, both of which were excellent (sadly, neither the lobster rolls nor the cheesecake lollipops were on the menu when we went). 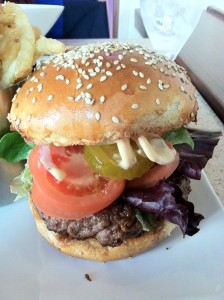 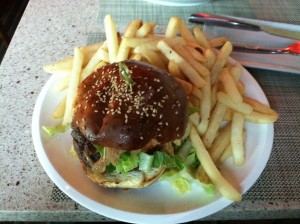 In our earlier visit, I had the Bistro Burger, which was excellent. It looked great and the flavor was exceptional with the combination of applewood smoked bacon, horseradish mayo, and avocado. The next time I had the Sip City Burger which was a step down from the Bistro Burger but still excellent. I don’t know if the Kobe beef was genuine Kobe beef, but it was certainly juicy and flavorful. 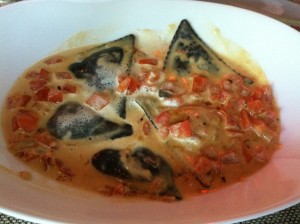 Lisa had the whole wheat fusilli primavera the first time, which left something to be desired (but then again, I chalked that up to the challenge of cooking with whole wheat pasta. On our second visit, she had the bi-colored ravioli which was dark on one side and light on the other. The taste was not bad at all, although the presentation was a bit shoddy as you can see here.

The best way I can describe the entire Sip City menu is that it’s “upscale bar food”. Not that there’s anything wrong with that.

The problem is, in many ways, Sip City seems to have an identity crisis. It is first and foremost a bar, but it seems to have a long way to go as far as doubling as a fine restaurant. At prices for entrees ranging from $12 to $24, it’s not cheap. I would hope that the quality of the service would catch up to the food. I would easily give the food a 4 or even a 4.5 out of 5, but the service drops my overall rating to 3 stars out of five. Perhaps I’ll try it again in the coming months, but I was not impressed the last time.