Sushi Palace was a progenitor of “all you can eat table service” which is becoming all the rage in restaurants in Great Neck and elsewhere. Depending on how much you can eat the value is phenomenal, but with only a few exceptions the food rarely rises to what we’d consider top quality.

We went to Sushi Palace on a Sunday night. The first thing we noticed was how crowded it was. The parking lot (conveniently located in the back of the restaurant, so no need for street parking) was pretty packed, and when we walked in every one of the approximately 20 tables was full.

I already wrote a Review of Era Asian Cuisine on Bond Street, which features an all-you-can-eat menu that’s served at your table. Sushi Palace was actually the restaurant that pioneered this concept in Great Neck, and how crowded the restaurant always is shows the benefits of being first.

We started out by getting a pencil and two menus, one for the kitchen and one for the sushi bar. Note that the menu is subject to change from day to day, but here’s what it looked like when we were there.

While I believe Sushi Palace has a regular menu and a take-out menu, it’s safe to say that everyone was there for the all-you-can-eat menu. With drink it costs about $25 per person, so depending on how much you can stuff into yourself it can be a pretty good deal.

We tried to sample a little of every kind of food on the menu. We started with seafood salad. 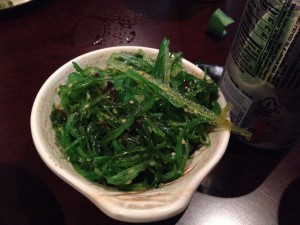 And then the crabmeat salad.

The salads were light, but the seaweed salad seemed a little too salty and the crabmeat salad (which not surprisingly didn’t contain real crabmeat) was a little warmer than I liked and contained a bit too many breadcrumbs.

Next, we tried the cooked tuna, available on weekends and holidays. 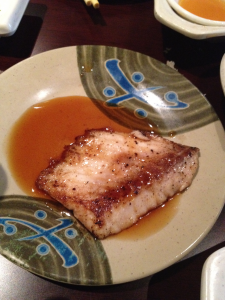 This was one grilled to perfection with a delicious sauce and light, fresh taste.

Next, we wanted to try out some of their tempura. We went a little light to pace ourselves, going with pumpkin and imitation crabmeat. 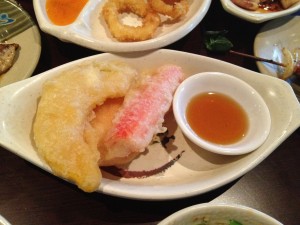 The tempura batter was a little thicker and greasier than I would have liked and that I’ve had at other places.

The menu was definitely kid-friendly with lots of fried choices like Japanese cakes and fried calamari rings. 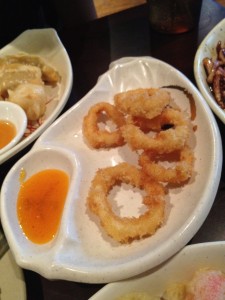 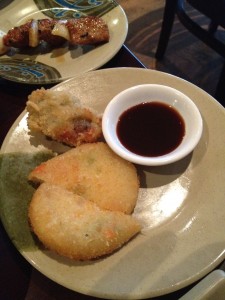 There were also some more adult choices. In the picture next to the Japanese cake above you’ll see a fried oyster, which would surely elicit an “ewww” from kids once they realize what’s inside, but which I found big, fresh, and juicy the way oysters should be.

Another “grown up” choice is the barbecues squid. 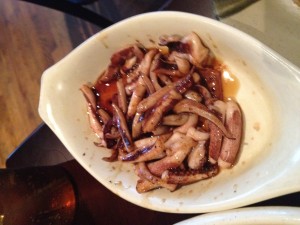 This one was definitely not as fresh as it should have been. The squid pieces just didn’t have the “snap”, the sweetness, or the chewiness of fresh squid.

Finally, we came to the highlight of the evening and the namesake of the restaurant: the sushi.

We started with a couple individual pieces available only on weekends and holidays: the pepper salmon and yellowtail tradito, and octopus. 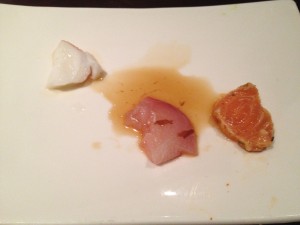 The yellowtail and octopus were extremely fresh, the salmon not so much. I wouldn’t say the sashimi was “bad”, but it just lacked flavor, which is usually a sign that it’s been frozen for a while.

We had a bigger platter brought out next. This platter consisted of white tuna, red snapper, red clam, pepper tuna, squid, an ocean roll, and a salmon skin hand roll. 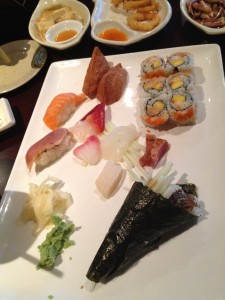 Again, the raw fish seemed a little off. Not that it was bad or rancid or anything, but it just lacked any flavor. It wasn’t as bad as what I encountered in Harvest Buffet, where the fish was actually frozen solid, but I’d say it was a far cry from the fresh sushi you can find around Great Neck at places like Miraku and Chez Kama.

We went for another round, this time going with cooked rolls. 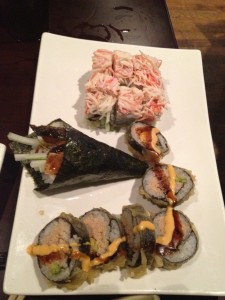 This was the Godzilla roll, with “fried spicy tuna”, and the Great Neck roll with tempura shrimp, avocado, and spicy tuna. These rolls reminded me a little of Daruma’s “rolls for people who don’t like to eat raw fish” rolls. They had decent taste.

The surprising highlight for me was the salmon skin hand roll. You’ll notice that I ordered it twice. It had an amazing taste and texture.

We ended the evening with green tea and red bean ice cream, always a perfect way to end off a night of gorging. 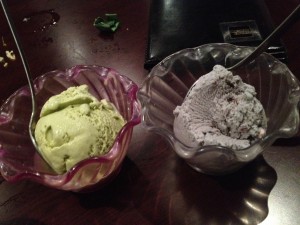 Overall, service was excellent. Our plates were cleared quickly, our water glasses were always full, and we were promptly given new menus. As the evening went on there was only one glitch with the service–one waitress took our order. After about 10 and 20 minutes of waiting, another waitress passed by and asked if we were okay. We finally realized that the first waitress had lost our order. She was apologetic and promptly delivered our next order as soon as we got it in.

As for the food quality, as you can probably tell from my descriptions above it was largely hit-or-miss. Certain dishes were fantastic, and the presentation was great, but most of the sushi lacked any kind of flavor. My best advice is to go in with the right expectations. If you’re hungry and just want to indulge, Sushi Palace is a great place to go, and chances are you’ll find something on the menu you’ll enjoy thoroughly. But if you’re looking for the absolute freshest sushi in town, this probably isn’t the place for you.