For years, Panchos had been the go-to Mexican restaurant in Great Neck (if you don’t count Chipolte which, let’s face it, isn’t really Mexican food). Sadly, Panchos closed its doors in 2013. But nature abhors a vacuum, and so Senior Nacho opened its doors later that year.

We went to Senior Nacho on a beautiful summer day. 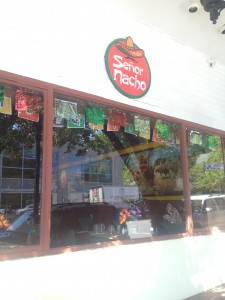 The decor is pretty typical of a Mexican restaurant; bright colors, pinatas adorning the ceilings, and plenty of decorations that clearly were given to them by Corona. 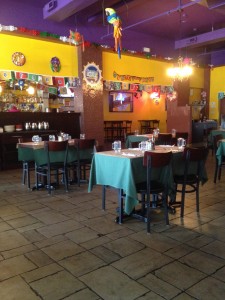 Including this cut-out of a senor and senorita (no we weren’t tempted to take a picture, but I imagine after a few rounds this probably gets some decent usage).

As you’re seated, you’re served a complementary dish of nachos, which were still warm, and homemade salsa, which was plenty spicy and very fresh. 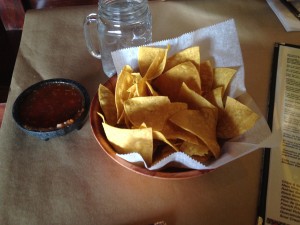 The menu contains an impressive array of authentic Mexican dishes, three quarters of which I can’t read, so I just asked the server what the most popular dishes were. He said the fajitas, the chimichangas, and the arroz con pollo.

We started with Mexican corn on the cob, one of my must-have dishes in street fairs. 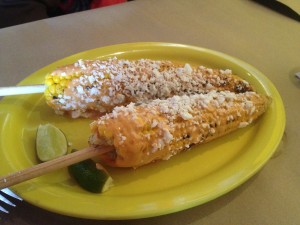 It was perfectly grilled; soft but with a nice snap. The kernels were smaller than corn I’m used to and have a wonderful sweet flavor. It had chipolte mayo on the outside, as well as cheese, but I would have happily eaten just the corn.

Next, I tried the Huaraches, or corn cakes. 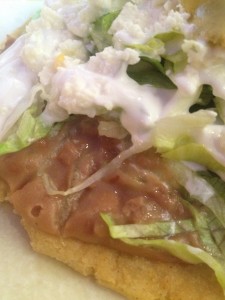 This one was not quite what I was expecting. The thin layer of corn cake on the bottom didn’t have much taste, and it wasn’t helped along by the avocado on top which didn’t seem like it was the freshest, nor the cheese, shredded lettuce and sour cream over the refried beans. The whole thing was very light, but just seemed to lack much flavor or personality.

For our entree, we got a burrito. 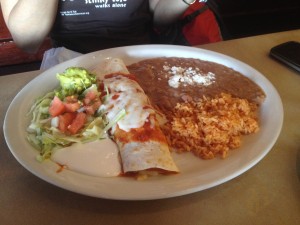 Visually, it looked great, with generous helpings of salad, rice, and refried beans. The taste was very good; not as good as I’ve had in places like Mexico or Southern California, but of course that’s a high bar.

Finally, I got the pollo con arroz, as the server had suggested. 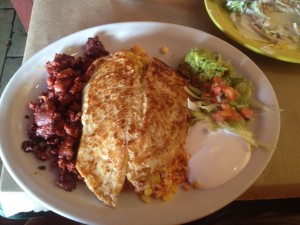 The chicken was sliced thin and grilled nicely, and the chorizo was also very good. Again, the guacamole wasn’t bad, but didn’t seem like the freshest.

The staff was super friendly and service excellent. And the portions of the food were generous. As for the flavor and the freshness, all I can say was it was decent, but I wasn’t necessarily blown away. Senor Nacho is the sort of restaurant where, if I’m in the mood for Mexican, I’d definitely come back for my fix.