Sake 68 is a new “Japanese fusion” restaurant in Great Neck. It takes a bit of chutzpah to start up another Japanese restaurant in a town full of them, from Matsuya to Masago to Daruma to Sushi Palace to New Era to Naru Sushi to the excellent Chez Kama right across the street. And as we’ve seen with the recently departed Miraku, it takes a lot to make it in this town.

Walking into the restaurant, it was pretty simple in terms of its decor. The walls and floors were white, the restaurant was fairly narrow but enough to hold about 10 tables. Two men stood at the sushi bar in back. 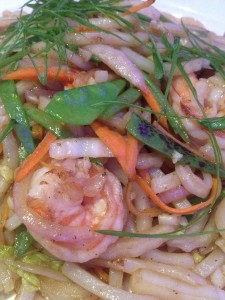 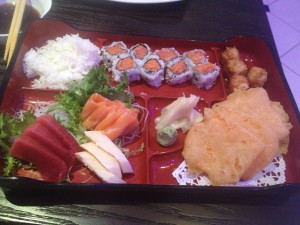 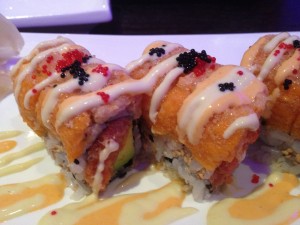 It was pretty sparse on a Saturday night. We were seated promptly and given cold, disposable towels to wipe our hands. After we ordered, the server brought us out some miso soup and some salad (iceberg lettuce, cucumber, tomatoes, and shredded carrots with a sweet ginger dressing).

We ordered the spicy seafood soup. Being billed as a “fusion” restauran, we were expecting something along the lines of a Tom Yam soup. Instead, we got this: 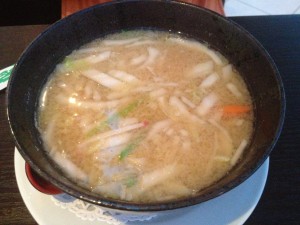 While the portion size was generous, the soup itself wasn’t all that impressive. It had a miso base and a lot of random vegetables thrown in, from sliced snowpeas to carrots and a lot of cabbage. The “seafood” was a melange of the kinds of seafood you might find in a Chinese-style hotpot: imitation crabmeat, fish cake, and a few scallops. As for the “spicy” part, there was certainly a kick, but not much flavor. It wasn’t bad to eat, but then again it didn’t seem like something I couldn’t have thrown together myself after a visit to H-Mart.

To test out the “Japanese” part, we decided to try some sushi rolls. From the “Chef’s Special Roll” part of the menu we decided to get the “snowman roll” consisting of yellowtail, salmon, and mango topped with spicy white tuna on top with wasabi relish. 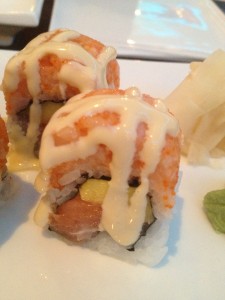 I can’t say the roll was all that bad, but I can’t say it was particularly special either. It was just pretty much on par with what you might get a block over at New Era or down the road at Sushi Palace. In this particular roll, the spicy salmon on top didn’t seem especially flavorful, and the chunks of salmon in the roll weren’t bad, but they weren’t the freshest either. The wasabi mayo seemed a bit overdone, and the mango added an interesting twist but nothing that really blew me away.

At an earlier visit, I’d ordered the “spicy girl” and had pretty much the same impression.

The fish seemed fresh enough, and technically it seemed to be executed well, but the quality of the cut and the roll feel short of what I’d expect in an authentic sushi restaurant (to experience that, just cross the street to Chez Kama). Not to say that it was bad; all in all, it was executed fine technically, but really lacked personality.

We went for two entrees. Now the last time we went, Lisa ordered the Yakisoba noodles. Because she can’t have too much salt, she asked if it could be made with less salt. Now most restaurants will nod their heads and just serve the same pre-mixed salt. But in our case, they did a wonderful job of keeping the salt low and the flavor excellent but wonderfully light. The dish even looked great. 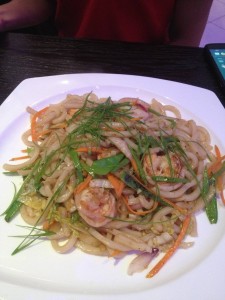 In fact, Lisa loved it so much that she ordered the same thing the next time. Here’s what we got:

As far as the flavor goes, this was a case of “A Tale of Two Udons”. The first time these noodles were cooked almost to perfection. The blend of Napa cabbage, shrimp, snow peas, scallions was excellent, and unlike other restaurants we’ve been to, the noodles weren’t soggy.

The second time we visited, the noodles weren’t quite as good. They came out a bit more starchy and moist. I really would have liked to see a little more consistency from visit to visit.

I also had a decidedly inconsistent experience both times as well. The first time, I ordered the Sashimi Bento Box:

While the box was presented beautifully, I wasn’t exactly crazy about the flavor. If you zoom into the picture of the sashimi, you’ll see that it’s not cut exactly the same way a seasoned sushi chef would. The tempura was a greasy mess. Although I did enjoy the rolls and the fried shumai.

My next visit, I decided to order the “Twin Lobster Tail Hibachi”. 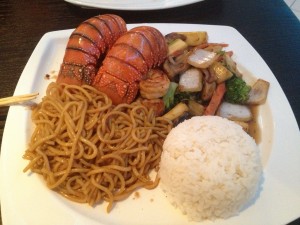 This dish cost $29. Sadly, I was very underwhelmed. The lo mein had a decent consistency, but had an odd sweet and slightly charbroiled taste to it, not terrible but definitely not what I was expecting. The assorted grilled vegetables were a mix of onions, carrots, broccoli, mushrooms, and squash in a somewhat ordinary brown sauce. I was expecting a fresh, crisp “Benihana” type experience, but ended up getting something that wasn’t really much more than standard Chinese takeout.

As for the lobster itself, once I lifted the lobster tails, I saw that the lobster had already been chopped and sauteed underneath, in the same brown sauce. The flavor was okay, but overall the lobster seemed dry and again lacked the fresh “snap” that good lobster should have. Again, it make me think of slightly-above-average Chinese takeout.

That’s probably a good way to sum up Sake 68. It bills itself as “Japanese Fusion”, but despite having some Japanese-named dishes on the menu, at the end of the day it feels like the kind of restaurant you might call to get some delivery (they do have the ability to place an order for delivery online, and delivery over $20 is free). But as for whether it’s a destination “fusion” place like Wild Ginger or Elaine’s, unfortunately it falls a bit short.