One of the better sushi experiences in Great Neck

Matsuya has an enormous number of rolls to choose from, and to their great credit they use fresh fish and never the kind of carbon monoxide-treated fish that’s so prevant at sushi buffets and discount restaurants. It is definitely among the upper echelon of sushi restaurants in Great Neck.

When my friend Harris, a long time Great Neck resident, wanted to take me out for sushi a few years ago when I was new to Great Neck, there were a lot to choose from. It surprised me that he chose to take me to Matsuya (in the Waldbaum’s supermarket). After all, Daruma was by far the more well-known sushi restaurant in Great Neck.

Turns out my friend knew what he was talking about. In the years since, Matsuya has grown from a little unknown sushi joint in a strip mall to one of the better sushi places on Long Island. When you walk in the door, you’re treated to the best decor I’ve seen in a Great Neck restaurant.

Yes, that’s a beautiful tropical fish tank that spans the entire middle of the restaurant. No, the fish in the tank are not on the menu. But they do provide a great backdrop, whether you’re on a romantic evening out or you’re trying to calm down your kids (I wonder how many times the waiters and waitresses there hear the word “Nemo” on a given day).

As for the sushi, I’ve found that most of the better sushi restaurants in Great Neck, whether you’re talking Daruma, Chez Kama, Masago, etc., all are comparable as far as the freshness of the fish goes. That means when comparing them, one has to look to other differentiating factors.

We started out with the red seafood bisque. 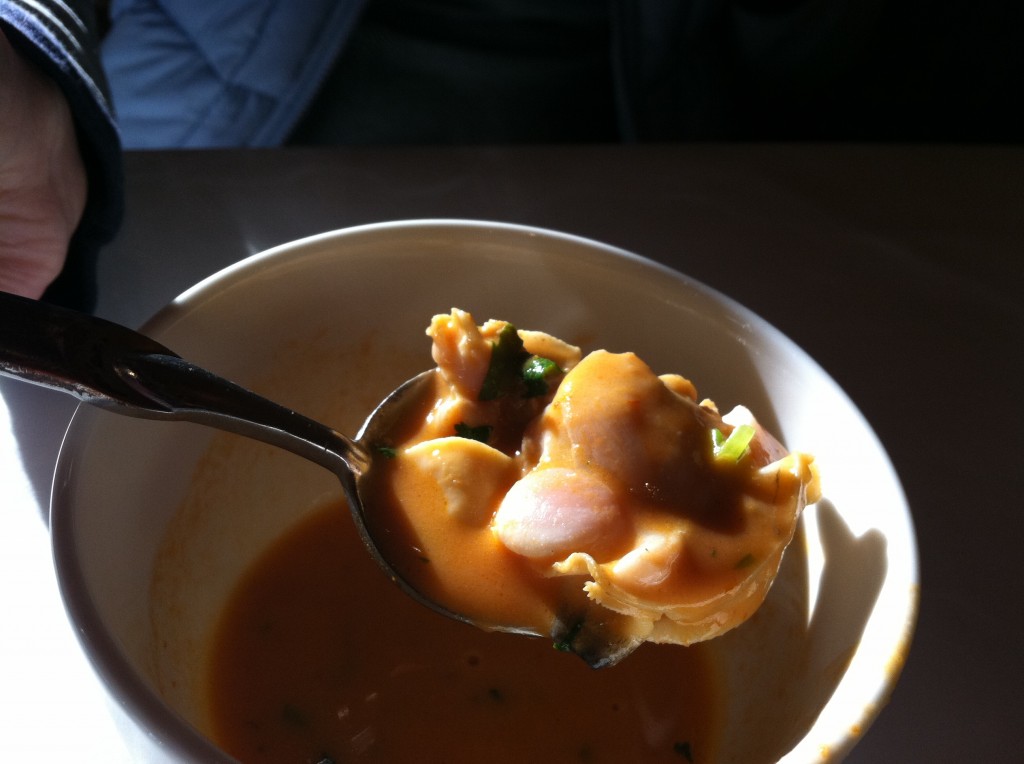 This one was delightful. The soup was rich, tangy and had just the right kick to it, and the portions of seafood were generous.

Next up, of course, was the sushi itself. We tried three original rolls: 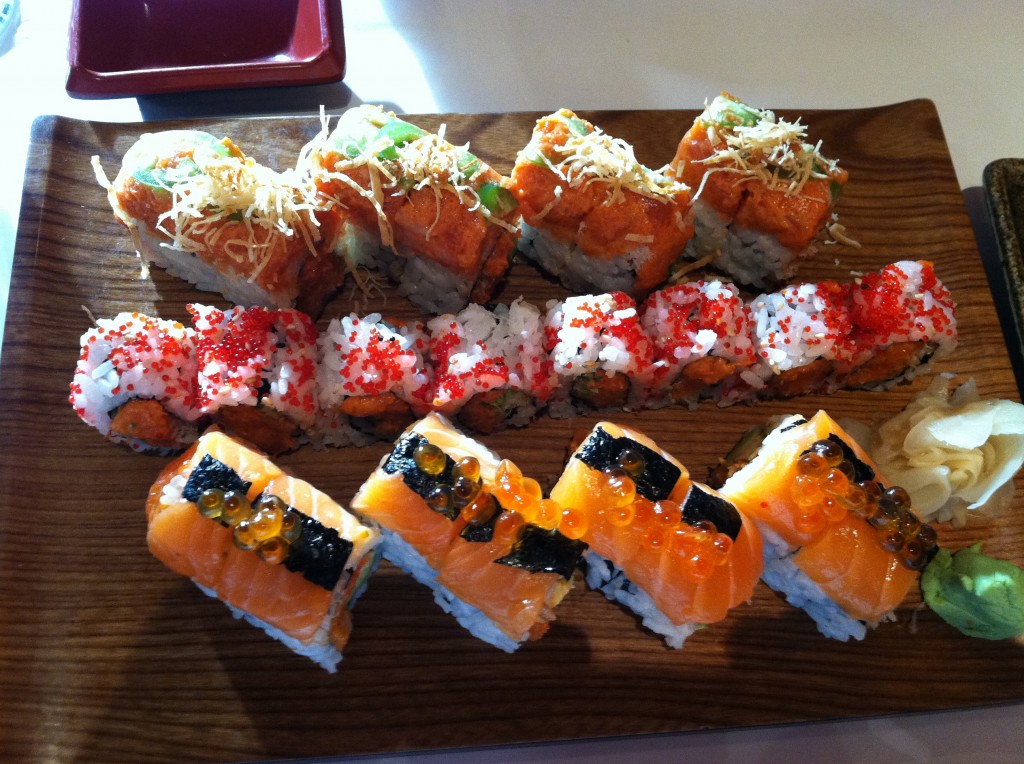 The top roll was the “Five Alarm”, which consisted of spicy tuna, avocado, and scallions inside. Outside was more spicy tuna, golden crispies, and bits of jalapeno. It was basically a great tasting spicy tuna roll with an extra little kick from the jalapeno which really brought some personality and uniqueness to it.

I can’t quite remember what the second roll was, but I think it was from their “House Classics” menu. Whatever it was, it went pretty quickly.

The third roll was the fancifully named “Yo Yo Ma” roll, with spicy salmon and avocado inside and salmon sashima and inkura (salmon eggs) outside. If you love salmon, you’ll think you died and went to heaven. The taste was as beautiful as the presentation.

They have a special limeade they make which is out of this world. If it’s a hot summer day and you don’t quite feel like hot tea, this definitely hits the spot. 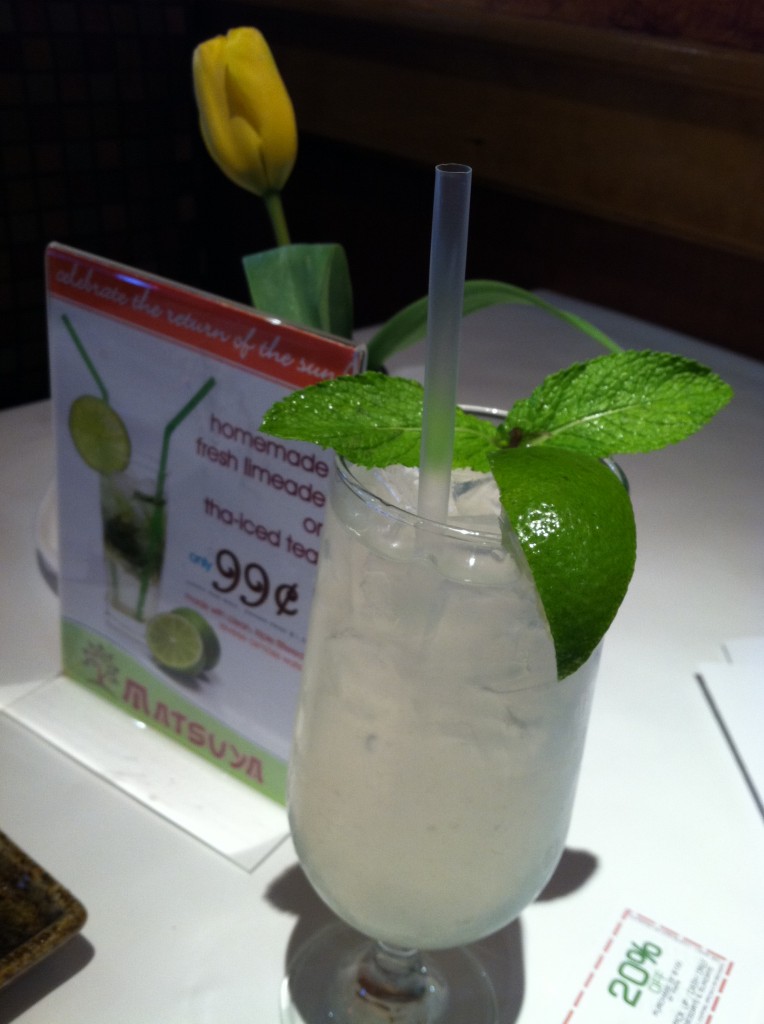 We finished our meal off with some mochi ice cream, which was pretty much the perfect way to top off the night. 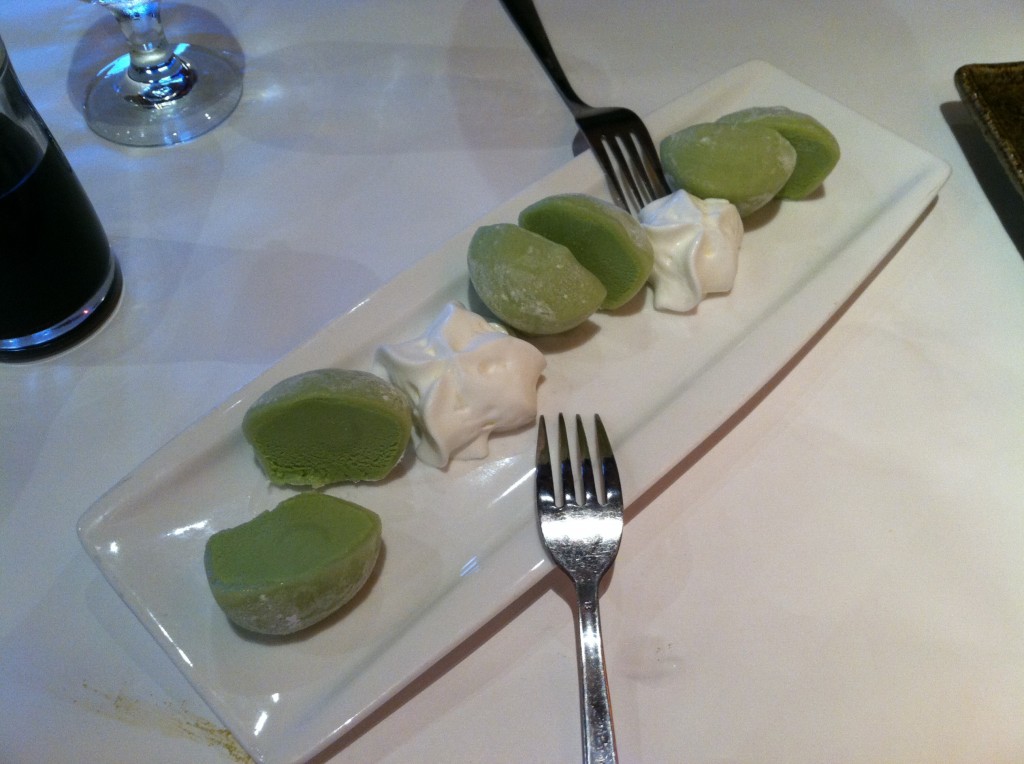 It’s clear that Matsuya goes out of its way to make sure its customers are happy. There is a large selection of sushi rolls which are kosher, designated by a little Star of David on the menu. They make a point to say that their beef is grass-fed, hormone, and antibiotic-free; and that they refuse to use carbon-monoxide treated frozen fish (which is not uncommon at sushi buffets).

Overall, Matsuya is definitely among the better Great Neck sushi restaurants with its beautiful decor, its friendly service (we were greeted warmly both upon entering and exiting the restaurant), and the creativity of its special sushi rolls.

I’d originally given Matsuya a 4.5 star rating. Since then, my friend (the same one I talked about above) has said he’s noticed a decline in the quality of the fish. And when I ordered take-out from them from their Lunch Special menu recently I also noticed that the quality of the food, while good, was not quite up to what I’d expect. So for now, I’ll be bumping the rating down to a 4. Still highly recommended, but not quite the “must-go” restaurant I originally wrote about. We’ll revisit this in a few months.