After I first moved to Great Neck, my then-boss was kind enough to give me a gift certificate to La Rotonda, saying it was the best thin-crust brick oven pizza I’d ever have.

When you walk into La Rotonda, you’re brought into a different world. The decor feels like old Italy, with plenty of paintings of Italy and a cozy, brick motif. As you walk in, you can see the real brick oven in back constantly working.

I went with a big group, so we decided to sample a whole bunch of their pizzas. But first, we started out with bread. 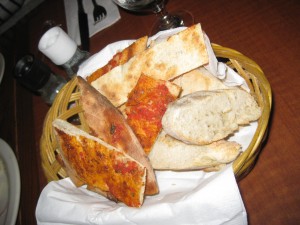 There was fresh Italian bread and cut-up tomato pie. I kid you not–I could have eaten just the bread and been satisfied for the night. The sauce on the tomato pie was sweet, light, and slightly garlicy without being too salty.

We went on to try the oriental salad. 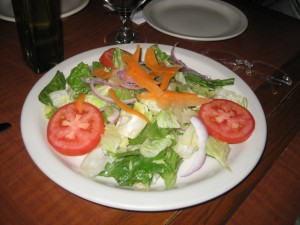 This one was admittedly a bit underwhelming. It was just a garden salad with onions, tomatoes, and lettuce. What made it “oriental” was a sweet ginger sesame dressing. Not bad, but nothing to write home about.

Of course, we had to try several of the pizzas. We started with the classic margherita. 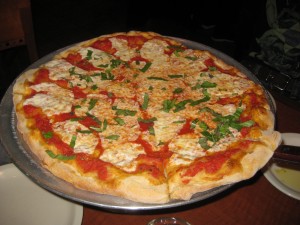 Just as advertised, the crust is exceptionally thin, crispy and light. The pizza had a healthy amount of mozzarella cheese and a light sweet tomato sauce. The basil sprinkled on top was a little lighter than I’m used to, but overall it worked.

The next pizza we tried was a vegetable pizza. 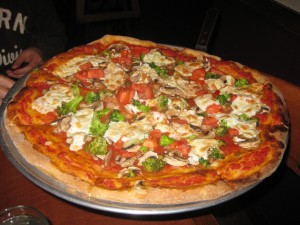 Most vegetable pizzas I’ve had end up being pretty soggy. In this case, the vegetables were crisp and fresh, and gave the pie an overall light and unexpectedly sweet flavor.

The next pie we tried as the Toscana. 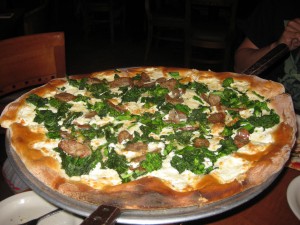 This one was much different than the others. It didn’t have marinara sauce, but instead had spinach, sausage, and broccoli rabe. I think the bitterness of the broccoli rabe was supposed to balance with the saltiness of the sausage and the garlic, white wine, and mozzarella, but I found the bitterness a bit overwhelming. Definitely an acquired taste, and not a bad choice if you’re looking for something healthy and out of the ordinary.

Finally, we tried the “quattro formaggi” which true to its name had four cheeses on top (again, no marinara sauce), fontina, pecorino romano, mozzarella, and the star of the show, gorgonzola. 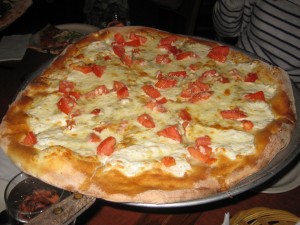 It also had layer of fresh tomatoes on top. If you love cheese, you’ll love this pie where you’ll experience the chewiness of the mozzarella, the earthy blue-cheese flavor of the gorgonzola, and the subtle nutty flavors of the fontina and sharpness of the romano.

The pizzas were all expertly created in their brick oven stove, and all had a delightfully light and thin crust. Each had its own personality.

All in all, La Rotonda is the best thin-crust pizza you’ll have in Great Neck or indeed all of Nassau County. It’s a bit pricier than your typical pizza place, but definitely a nice place to go when you’d like a slightly-upscale night with a group or a date.