Update 7/7/12. As regular readers of this blog know, from time to time I’ll revisit a restaurant to see if an old review is still valid. If I see the the restaurant has improved, I’ll bump up my score, and if it hasn’t I’ll make sure my review is updated to reflect it. Honestly, I think this is a much better system than newspaper reviewers (who can make or break a restaurant based on a single experience from years ago) or sites like Yelp (where people have no problems leaving one-star reviews if the server so much as looks at them funny.

Today, I had the chance to go back to Juliebelle’s. I was happy to see a fairly steady stream of people coming in. Juliebelle’s is at a place on Northern Boulevard that’s not the easiest to get to, so those who make the effort do so because of the quality of the food.

A few things have changed. First, they no longer serve breakfast. It kind of makes sense, especially since they open at 10 AM. This is definitely a place for a good lunch or even a light dinner.

Last time I came we focused primarily on the chicken. Lisa likes to eat healthy, so she stuck to the chicken this time, ordering the Godfather with grilled chicken. 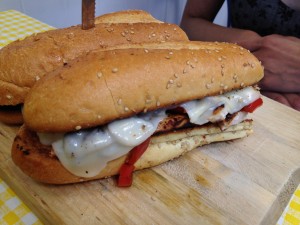 I watched as she took a bite into it and heard the same “mmmmm!” that we experienced last time. The grilled chicken was juicy and not dry, with roasted peppers that added a sweetness to the sandwich. She said the mushrooms were a little salty but added nice flavor. And all of this was put within two pieces of toasted garlic bread, slightly burnt on the very edges but overall with a delightful crunch and flavor.

As for me, I wanted to try something different. I asked the young man behind the counter what the most popular things on the menu were. He reiterated the same chicken sandwiches as last time, the Rio Grande and the A-Team. Then, he said that the Burning Bridges burger was the showcase burger, and the Kobayashi Maru (one of several Star Trek references on the menu) and the “My Only Hope” (one of several Star Wars references) were the best on the steak menu.

When I read the description of the Burning Bridges burger, I had to have it. Burger Stuffed with Pulled Pork, Caramelized Onions and Sautéed Mushrooms, Bacon, Cheddar, Onion Rings and Gravy. 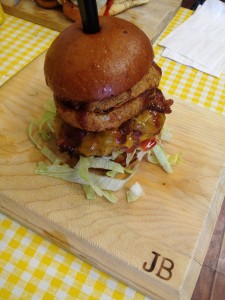 Now as good as it looks, it tasted even better. The beef of the burger and the pulled pork made a delicious combination that was so juicy it oozed into the cutting board. The inclusion of onion rings and sauteed onions, along with cheddar cheese and lettuce made for an amazingly delicious experience. The only tough part was actually eating it–turns out the knife they stick into it acts like a giant toothpick to keep it together and isn’t really meant for cutting it. The best thing to do is to just start nibbling away at the corners.

I’m happy to report that Juliebelle’s retains its solid 4.5 star rating from me. It’s still the best non-Jewish sandwich shop in Great Neck, and well worth making the trek to that part of Northern Boulevard. With its huge menu you can eat a different sandwich every day for six months and not have the same sandwich two days in a row. I will be back!

It’s located pretty far from the main drag at 98 Northern Boulevard, right where Northern Boulevard splits off into Bayview Road near the Little Neck Border. Street parking is not much fun in that area, but if you’re patient you’ll find a spot pretty quickly. 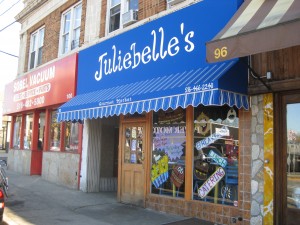 When you walk into Juliebelle’s, it’s set up like a friendly small-town luncheonette with home-style country decor. The walls are bright yellow, the chairs are blue and the tables have a blue checkerboard pattern and a nice vase of fake daisies. There were kitschy trinkets all over the restaurant. Oldies were playing on the radio. All over the walls were cute little hand-painted pictures and humorous foodie quotes such as:

“I always cook with wine. Sometimes I put it in the food.”
“Life is short. Eat dessert first.”

Something else very distinctive about Juliebelle’s is that their menu is hand-written on chalkboards all over the restaurant. They have breakfast fare (which is served all day), as well as ice-cream written on boards as you enter the door. Behind the counter there are lots of chalkboards for different kinds of lunch options. Going from right to left, they have separate chalkboards dedicated to dozens of options for burgers, steak sandwiches, chicken sandwiches, cold cut and vegetarian sandwiches, salads, hot finger foods, and hot dogs. Here’s their chalkboard for cold cut sandwiches: 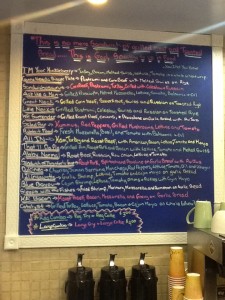 It can be overwhelming for first-time visitors, so be sure to study the menu on their Web site first. I asked for suggestions and the woman at the counter said the most popular choice is the Rio Grande, a sandwich with a chicken cutlet, peppers, onions, Pepper Jack cheese, sour cream, pico, and homemade guacamole on garlic bread. She also suggested the “A-Team”, a chicken cutlet, bacon, cheddar cheese, gravy and onion rings on garlic bread. We ordered both of them.

There was a bit of a long wait, but I’ll give them a pass on this since there was a big group ahead of us ordering two bags full of sandwiches to go. When our sandwiches were finally ready, they were served to us on wood cutting boards, with a big ol’ knife sitting right in the sandwich. Here was the Rio Grande, which we chose to have on a roll: 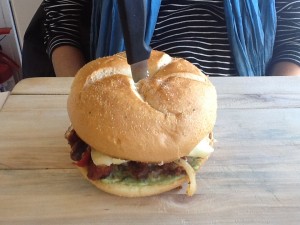 Opening it up you could see the great mix of cheese, meat, and veggies. 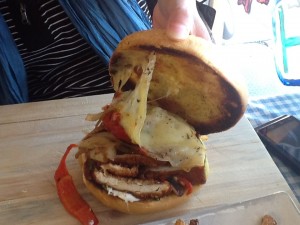 This sandwich was excellent. The ingredients were fresh, from the onions to the red peppers. The roll was perfectly toasted, the chicken cutlet was crispy and moist, and the homemade guac and sour cream gave the sandwich an interesting southwestern taste and an interesting range of textures.

Here’s what the A-Team looked like when it came out. We had it on a hero: 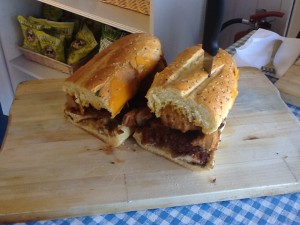 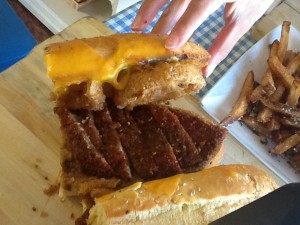 This one was just good comfort food. No subtlety here, everything was deep fried and crunchy, from the chicken cutlet to the onion rings (for the more health conscious there are definitely other choices, I realized later that you can substitute cajun chicken or grilled chicken to any sandwich).

We topped off our meal by sharing a plate of Parmesan fries. These were hand-cut and covered with Parmesan cheese and parsley. The fries did seem a little overdone and since it was the late afternoon the oil had probably been used a few times. I didn’t mind so much (but the health-conscious Lisa did and started confiscating fries from me). 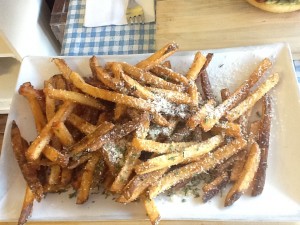 The service was top-notch. All of the employees were extremely friendly and helpful.

Overall, I’d say Juliebelle’s is a solid choice for breakfast, lunch or a light dinner. It’s somewhere between a regular sandwich counter and a gourmet sandwich shop. You’ll find a sandwich there to fit whatever mood you’re in.