An excellent neighborhood bistro that in some ways is still trying to find its identity but in other ways fully meets its goal of evoking the feel and flavor of a cozy European-style bistro.

Jean Marie Patisserie & Bistro is one of those places that I found to be much, much better than the negative reviews on Yelp would indicate. I’m not sure if I went there on a good night, if they’ve taken the negative reviews to heart and have since improved their menu and service, or a combination of the two. But bottom line, I found it to be quaint, friendly, cozy, and a place worth visiting.

The first thing to get out of the way is the name of this restaurant. The signage reads “Jean Marie Patisserie & Bistro”. But I was curious to find that there was no bakery on site (patisserie is the French word for bakery). The mystery was solved when I read their story on their Web site. Evidently in 1988 the chef and owner John Muscarello had a French pastry shop called Jean Marie Patisserie in Garden City that lost its lease in 2004. He re-opened in Great Neck years later at the location that now houses Juliebelle’s, and then relocated again to Middle Neck Road as a full service restaurant in Great Neck with a bakery. Unfortunately, just this last May he shuttered the bakery part of the restaurant because his pastries weren’t selling.

Furthering my confusion is that from the name I expected this to be like a French bistro. But with only a few exceptions the items on the menu seemed to have more American and even Italian influences. At first glance the menu seemed a little schizophrenic; it had everything from burgers to Asian satay to Mac and Cheese to Baked Pork Chops to Chicken Parmigiana, not exactly what I’d expect to find in a Parisian bistro.

But that mystery was solved when I saw on their Web site that they’ve changed the name of their restaurant to “Jean Marie’s American Bistro”. After doing a little research on what an American bistro should be, I found that it all the menu items made sense. Put simple, an American bistro “is likely to have no only French food, but basic filling foods inspired by other cuisines such as Asian and Italian.” I think this is a pretty important concept to understand before you go, as if you’re expecting mostly French fare, you’ll be disappointed.

The biggest thing that jumped out at me was that they had a Sunday brunch menu. As someone who’s waited for hours in Manhattan for a 2:00 PM seating at one of those trendy brunch places, I was excited to learn that Great Neck had its own brunch place. I was a little disappointed when I called to make a reservation. They asked me what time I’d like to come, and I said 10 AM. I got a rather surprised reaction on the phone, and was then told that the restaurant opens at noon on Sundays. There’s a word I like to use to refer to brunch at 12:00 PM. It’s called “lunch”.

Still, we decided to visit the restaurant at noon sharp on a Sunday. The restaurant has seating for about 40-50 people, along with seating outside on nice days at their diminutive patio out back. 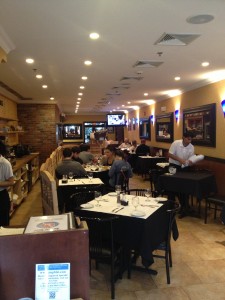 The staff was younger than I was expecting, but they were extremely competent and very friendly to us. We were seated at a table close to the brick oven where they bake fresh bread, a welcome seat on a chilly morning. 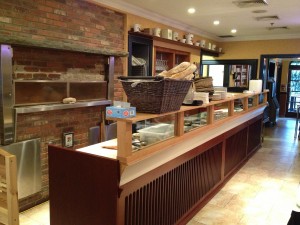 We ordered from the brunch menu. The prices ranged from $10 to $15, not wildly expensive but not cheap either. I asked for recommendations, and the young lady told me the Pancakes, Vegetable Omelette, and bagel frittatas were popular. I’ve noticed on Foursquare and Yelp that their paninis are good, so I asked which ones were the most popular. She said the Jean Marie, the Bourbon Street, and the Johnnie Boy. We ordered a Jean Marie (chicken cutlet, carmelized onion, fresh mozzarella cheese, raspberry coulis) and a Sunshine Sandwich (grilled cheese stuffed with crispy bacon and tomato).

While we waited, we were given a nice bread bowl with fresh bread. Our bowl had two different kinds of bread: French bread that was extremely fresh and crisp cut from a basket of fresh baguettes sitting at the counter, and a very crispy toasted raisin bread that tasted almost like a cracker. 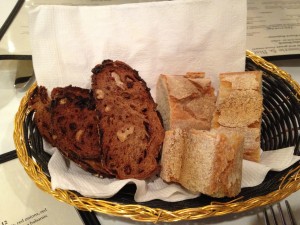 Both were very good. Their bread was the star of the restaurant; the chef and the young staff spent a good part of the morning baking fresh bread in the brick oven and putting fresh loaves on the wall. I got the sense this was the only remaining vestige of the proud bakery that used to be there. If you’re looking for the freshest bread in Great Neck, this is the place to get it, even if you’re not eating at the restaurant (we picked up a loaf to go). These are authentic breads as you’d find on the streets of Paris, from boules to bâtard, from white to whole grain. 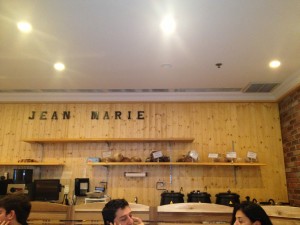 For drinks at brunch, you have the option of ordering Bloody Mary’s, Mimosa’s or Sangria (yes, you can have alcohol for breakfast!). I decided to go with a glass of Orange Juice. I was a little disappointed to see them take a jug of Tropicana out of their refrigerator and pour the glass for me. At $2.50 a pop, I really expected freshly squeezed juice, as you’d get in the finer brunch places in the City.

By 12:30 the place was already half full. Our veggie omelette came out first: 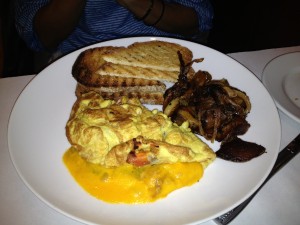 Now there are omelettes and there are omelettes. This fit under the second category. You can tell that the chef is a professional who studied at the Culinary Institute of America. This omelette was one of the most perfect ones I’ve tasted in my life. Tthe eggs were farm fresh, and all the ingredients from the mushrooms to the tomatoes to the spinach to the cheddar cheese tasted fresh as well. The eggs were perfectly thick and fluffy. The omelette was not too salty, and yet the balance and blend of the flavors really gave you a warm and comforting feeling.

Likewise, the home fries with onions were moist and had a nice rich flavor. And it goes without saying that the toast was excellent as well; obviously they used their own bread and grilled it to a brilliant crisp.

Next came the French Toast: 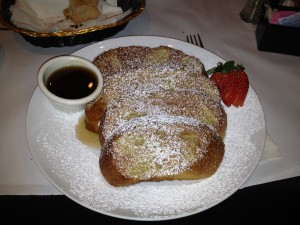 It goes without saying that the presentation was beautiful. As for the taste, again it was fresh, and they used their own brioche to make it. At the end of the day, though, while I did enjoy it tremendously, it wasn’t necessarily the best French toast I’ve had in my life. The bread seemed a little too thick for my taste, and there were places where it was a little too dry. Nothing that a little maple syrup couldn’t help, but Jean Marie has a way to go before they bump Raymond’s in my previous hometown of Montclair, NJ as the king of French Toast in my head.

As I said, service was excellent; the young staff was eager, enthusiastic, and cheery. Our waters were filled up pretty frequently, and we were greeted and thanked nicely as we entered and exited the restaurant.

Later that day we ate the paninis. Here’s the Jean Marie: 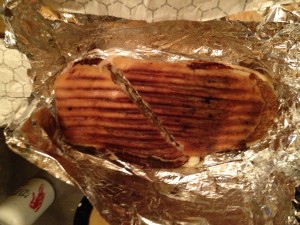 Again, this one was masterfully done. The flavors of the onions, mozzarella, and raspberry sauce went really well with the breaded chicken cutlet. This one didn’t last long.

Here’s the Sunshine Sandwich (only available on the Brunch menu): 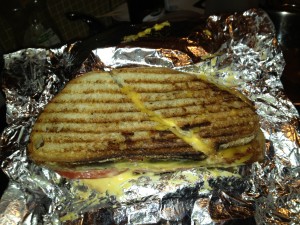 The best way I can describe this is to imagine if the grilled cheese sandwich you made as a kid with white bread and Kraft singles grew up, went to graduate school, and is now rich and famous.

The owner writes on his Web site that he aspires for the restaurant to have an atmosphere that is “warm and inviting (and) has the feel and flavor of a of a cozy Parisian Bistro”. On the Sunday morning we went, we definitely got that. It’s definitely worth a visit.