It seems that great diners are a vanishing breed. The most recent casualty was the late great Scobee Diner in Little Neck.

Since 1950, a luncheonette called Frederick’s sat at the corner of Grace Avenue and Bond Street. In 2010, the founders of the restaurant finally sold their business to a new group who turned it into the Great Neck Diner.

I admire what the new owners did. Instead of razing the restaurant and building yet another sushi restaurant, they decided to open a brand new “old fashioned” diner, right in the middle of Great Neck. While the signage is new, the iconic corner location remains.

Walking into the Great Neck Diner, immediately it feels like you’ve been transported in time. They really captured the feel of a classic 50’s style diner, complete with what looks like soda fountain barstools up front… 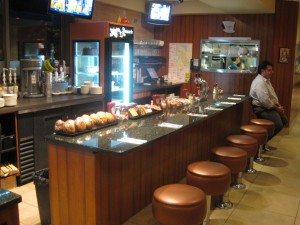 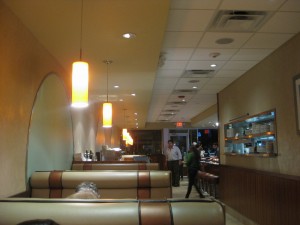 Having grown up in New Jersey, I’ve been to many diners in my life, and this one really felt authentic (unlike some of the “retro” establishments you see popping up). It even smelled like a diner (in a good way). And it was uniquely local–there was a mural of a Great Neck Park on the back wall. 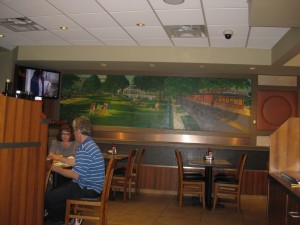 As we entered the diner we were greeted several times by a bunch of some enthusiastic loud and friendly staff and management. The menu consisted of typical diner fare, from breakfasts to sandwiches to salads to burgers and entrees. I asked the server what the best/most popular dish was and he said without hesitation the chicken souvlaki or the beef gyro. I decided to go with the gyro while Lisa went with the beef sliders. With my meal came a soup, so I ordered the matzo ball soup. The soup came out amazingly fast. 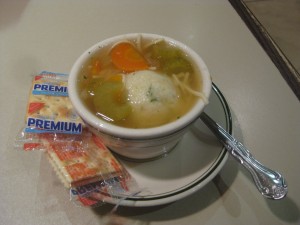 No, it wasn’t exactly Kensington Diner–the matzo didn’t seem homemade and the soup of course wasn’t off of grandma’s stove. But for a free soup with entree, it was a nice way to start off the meal.

Lisa’s sliders came out next. 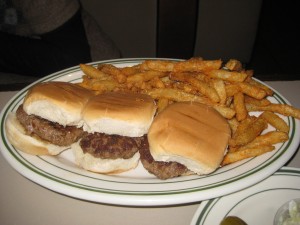 The fries were different than traditional diner fare–they were extra crispy with an outer crunchy layer. The burgers themselves too were thick and grilled to order with a beefy flavor that wasn’t too salty. They were kind of bare, I would have liked to see some lettuce, tomatoes, or onions on the side but then again perhaps cutting back on those things are what helps them these dishes affordable.

On to the star of the show, the beef gyro: 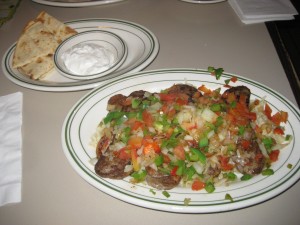 These were the veggies I was looking for–a generous amount of chopped green peppers, tomatoes, and onions over nicely seasoned beef. On the side came a small plate of pita bread and sour cream. I also chose rice on the side. I did my best impression of a street vendor and assembled a very tasty gyro: 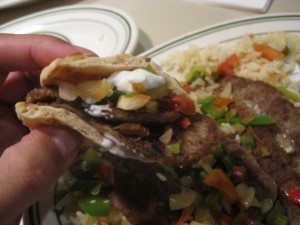 The taste was very good. It was definitely a fresh and dare I say healthy choice, not the greasy mess you find at food trucks and stands. And the portions were generous–I had enough left over to have for lunch the next day.

Overall, I’d give the food a solid 3.5 stars–it’s not gourmet food, but it’s really good diner food. But the star of the restaurant was the service. From the moment we entered we were greeted with smiles. Everyone we saw associated with the restaurant was polite and a gentleman, down to even the most subtle things (for example, the busboy was very respectful when moving our dishes, and said a polite “thank you miss” when Lisa helped with a dish). Our water glasses were never close to empty. And the food came out very, very fast (there’s an order window where you see the food constantly coming out). I know things like that seem trivial, but in today’s world where manners seem like they’re fading away, it’s great to see this home-town restaurant remind us what service should be.

It may take a while for Great Neck Diner to achieve the same amount of loyalty and iconic status as its predecessor, but it’s definitely off to a good start.

← Jump on this Groupon to Miraku, a great new restaurant in Great Neck
Review of Mario’s Pizzeria (43 Great Neck Road) →
Logging In...