Great Neck is a treasure trove of fine culinary experiences, from incredible sushi to great steaks to great Italian to a fantastic pastrami sandwich. And so you’d think that it’d be a haven for great Chinese food as well. And you’d be wrong.

By the way, when I say “Chinese food” in this post, I’m not talking about the authentic Chinese food that you’d find in Flushing, Chinatown, or…China. No, I’m talking about Americanized dishes like Sweet and Sour Pork, General Tso’s Chicken, Lo Mein, and Shrimp with Lobster Sauce that a Chinese chef would look at and scratch his head trying to figure out what it is. It’s such food that I (and no doubt you) grew up eating, and even though the world has gotten health-conscious and eschews all that grease and deep-fried goodness, it’s still comforting to order it every now and then.

When I get menus stuffed under my door at my co-op, it’s usually for a restaurant like Ocean in Little Neck or East Shore Wok in Manhasset. I used to get Foo Hwa Kitchen menus as well, but those stopped coming–and I realized it’s because Foo Hwa no longer exists. But I never see menus for Great Neck. So after looking it up on Google and Yelp, it seems that there were only a few options: China Wok, Shang-Hai Grill, Golden Garden, and Cho-Sen Village.

I was always intrigued by Cho-Sen Village’s offering of Kosher Chinese Food. But I couldn’t find anywhere on their Web site that said they delivered. Shang-Hai Grill looked promising as well from their one Yelp rating, but I couldn’t find hide nor hair of a menu online. And I was admittedly scared off of China Wok after looking at the reviews on Google and Yelp, although I might try them again someday.

And so I decided to try out Golden Garden. There were only 5 Yelp reviews, but they all seemed fairly positive. I admittedly didn’t read the Google reviews very carefully, but I probably should have, for reasons that’ll become clear below.

But right away, there was a problem. I saw two menus, one on Yelp, and the other on AllMenus.com, and they were completely different–and neither one looked like it was the “official” menu from the restaurant. So I decided to trust the menu on AllMenus.com.

I ordered something called the “Golden Garden Special”. At $15.95, this was the priciest thing on the menu, so I figured it’d be a pretty good example of what this restaurant was capable of. The description read:

We also ordered the “Prawns and Broccoli” from a part of the menu called “Special Diet”, that said that “all diet dishes are steamed with sauce on the side. Served w. white rice or brown rice”. Given that Lisa is big on eating healthy, this was a welcome part of the menu.

The food came relatively quickly, although were were never given a total on the phone, which caused a bit of havoc as we tried to scrounge up money to pay them.

One thing that struck me as very odd was that there were no utensils, no napkins, and no menu included with the food. Although we did get two fortune cookies, something I haven’t gotten in a long time with my delivery orders.

The Prawns with Broccoli was actually not bad. The broccoli was nicely steamed, relatively fresh, and true to its word, not a smidge of seasoning. There was a container of brown sauce that had the typical soy sauce flavoring, but you could put as little or as much as you liked on it. The shrimp wasn’t the freshest in the world–I didn’t get that tell-tale “snap” that you get on really fresh shrimp. But it wasn’t horrible. 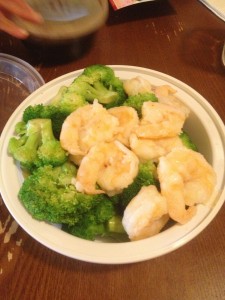 And now, onto horrible.

This is what the “Golden Garden Special” looked like out of the box. 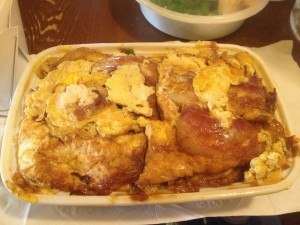 At the top of the dish was a bizarre pancake that consisted of what looked like an omelet with whole strips of soggy bacon and shrimp that had been flattened to a pulp, all fried in a salty scrambled egg.

Lifting this concoction showed a mess of random ingredients–roasted pork that seemed like it was days old to the point of being tough to chew, pieces of chicken, a few pieces of cabbage, some thin slices of scallop, broccoli, a few carrots, and a few bamboo pieces, all drowning in the same thick brown sauce I’d mentioned earlier. 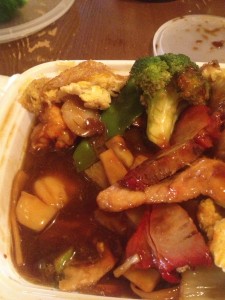 It honestly felt like the only reason this dish was “special” because they threw all their best leftovers into a pot and doused it with brown sauce.

As for the “freshly sliced lobster meat”, there was a little piece of a lobster tail that had shriveled up like a raisin. I soon found out why–biting into it, this lobster had the texture and flavor of a lobster that’s been sitting around for a very, very long time. 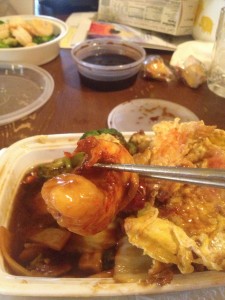 Now despite the fact that I write a blog, I’m honestly not a picky eater. I’ve eaten at all kinds of Chinese takeout places my whole life. But this dish was easily among the worst I’ve ever had. I started to wonder seriously if AllMenus had copied the menu from the wrong Golden Garden (there’s one in Selden that has this exact same menu..unclear whether it’s the same ownership).

Given that this is one of a handful of Chinese restaurants in Great Neck, I honestly hate to give it such a bad review, and granted this is based only on one experience (although after re-reading some of the reviews on Google, I’m not surprised).

Ironically, here’s the fortune I got: 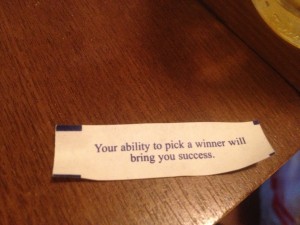 If they’re talking about my ability to pick Chinese restaurants, I’ll be stuck in my little apartment for a long, long time.