Not bad, but not spectacular.

Colbeh is one of several Kosher restaurants in Great Neck that serve Mediterranean style food. Our last visit there was pleasant, but at the end of the evening nothing stuck out as being particularly great.

With about 60% of Great Neck’s population being Jewish, it’s natural that people come from all over to enjoy the many dining establishments in town that cater to Kosher dining requirements. We’ve got Kosher pizza, Kosher BBQ, Kosher sushi, and a lot more. I’m not Jewish, but I still like seeing the Kosher certification on a restaurant window because, to paraphrase an old Hebrew National slogan, those restaurants answer to a “higher authority” than the local health inspector. Without going into the details of what makes a restaurant Kosher, suffice it to say that you can be sure the food is handled properly, is clean, and is fresh.

Colbeh advertises itself as a Mediterranean restaurant that serves Glatt Kosher cuisine. Glatt Kosher, for those who don’t know, is a variation of Jewish dietary law where not only does the animal need to be acceptable and slaughtered in an acceptable way (the definition of “Kosher”, but the animal must also have smooth, adhesion-fre lungs).

The Great Neck location is one of four; the others are in Manhattan, Little Neck, and Roslyn. If you’re not familiar with exactly what “Mediterranean cuisine” means, you’re not alone; the editors at Wikipedia also seem to not be able to come to much consensus, except to say that the phrase classifies food that comes from the nations around the Mediterranean Sea. Since that can encompass everything from Morocco to Israel, with France, Greece, Italy, and Turkey in between, that covers a lot of ground. In Colbeh’s case, the heaviest influence seems to be Persian, not surprising given that a huge percentage of Great Neck residents trace their heritage back to Iran (around the time of the 1979 revolution).

Suffice it to say, the entrees consist of large amounts of Kosher meat, whether it’s ground beef, grilled chicken, cubed beef, or turkey breast. There are also stew and fish selections.

The restaurant is located in the Andrew Hotel, a luxury boutique hotel in Great Neck right across from the train station. 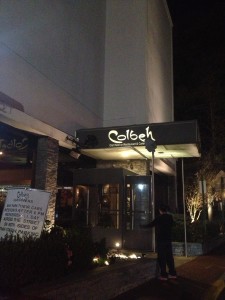 Upon entering we asked for a table for two. The restaurant was already very full, and seemed to be hosting multiple parties at once; it looks like the restaurant has about 20 tables, but most of them were set up for big families and groups. Ironically, both we and the couple after us had to wait about 10 minutes for a table on a Sunday night, as they had plenty of tables for big groups but not many for couples.

We started out with a complementary bowl of picked vegetables. 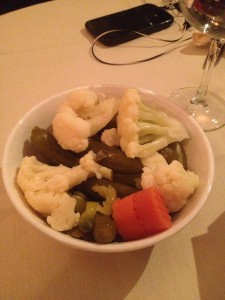 These were kind of your standard selection of cauliflower, carrots, and little pickles. It was a nice way to build up an appetite.

Next came a bowl of pitas. They were thin, hot, and toasty: 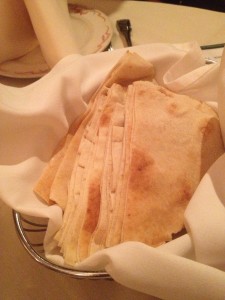 The menu was a bit confusing at first for me given that all the dishes were in Persian (or more accurately, the Anglicized version of the Persian names). As someone who couldn’t tell a Koobideh from a Joujeh, it took me a while to decipher the menu, but soon I realized there were basically three main kinds of dishes: beef, poultry, and fish. All entrees were served with rice, grilled tomatoes, and vegetables.

Perhaps due to how crowded the restaurant was, the waiter wasn’t exactly in the mood to explain the menu to us. He didn’t ask for our choice of rice (in the menu it’s between basmati or fresh dill and lima beans). When Lisa asked about them, he simply blurted out that we had a choice between “white and green”. When we took a little while to make up our minds, he told us that he’d just give us a combination of both.

Of course, I couldn’t go without an appetizer, and I knew exactly what I wanted: the Falafel. As someone who loves Falafel when I’m eating lunch in the City, I’ve gotten pretty good at telling a good falafel from a not-so-good one. Lisa decided to go for the Kubeh, described on the menu as “wheat shell stuffed with mushrooms”.

The Kubeh came out first. 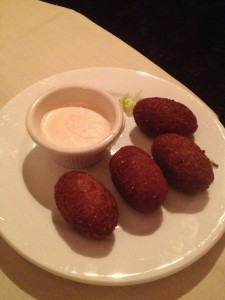 We were a little surprised to see that it was deep-fried, something that wasn’t clear on the menu. Chalk it up once again to our poor Persian skills. Regardless, it was hot and had a nice light wheat flavor.

Next came the falafel. 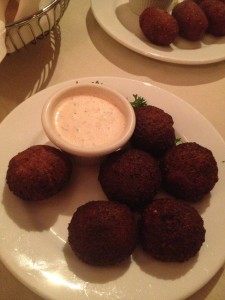 As far as falafel goes, it wasn’t the best I’ve ever had, but it wasn’t bad either. I’d say it was a bit more mild than typical deep-fried falafels in New York, with almost a creamy center. The spices were flavorful without being overpowering. As you can see in the picture, they were a bit overdone and some were even charred.

The server, evidently in a rush, took away our appetizer before we were finished. But then came the Chelo Kebab Sultani: 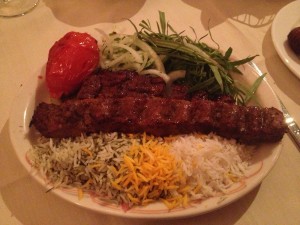 The presentation was beautiful. I actually ended up being glad that the waiter gave us all of the rices, as it gave us a chance to sample all of them. It came with a roasted tomato, which was very fresh and “popped” in your mouth. There were also herbs that we didn’t recognized (after asking the server, he told us one of the green leafy herbs was tarragon).

The beef was, not surprisingly, very fresh as well. The spices were flavorful, a bit too flavorful for my tastes, but no doubt just right for the Persian palate.

Next came the Boneless Joujeh and Koobideh Chelo. 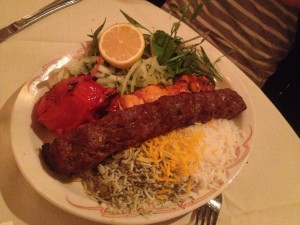 The chicken was also flavorful, with a lot of spices that evoke Middle Eastern flavors. It was also quite dry, with little bones still in it. The ground beef was also dry. I wasn’t sure if this is the way it was supposed to be or if it was just an off night.

Once the meal was over, we were shown a dessert tray. 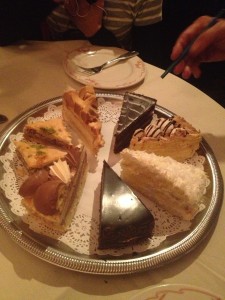 There was tiramisu, chocolate cake, baklava, and all kinds of other cakes. We had the tiramisu. Again, not the best I’ve ever had, but certainly passable. 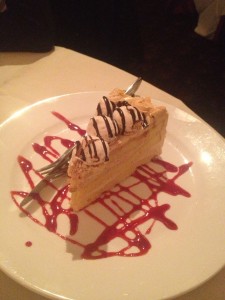 I noticed that my water glass was always full during the night, but I also noticed that a Diet Coke I’d ordered at the beginning of our order was never delivered. I don’t think the service was particularly bad, but on the other hand, it did feel rushed and disorganized at times.

As for the food, it was certainly high quality and clean. I admit, I’m not the sort of person who craves the taste of Mediterranean food, but I certainly thought the portions were huge and the food was good, if less than extraordinary.

Overall, I think for people who follow Glatt Kosher guidelines, it’s an excellent, if somewhat pricey, restaurant for dining and for having gatherings of family and friends. But for me, there were too many misses for me to give it more than 3.5 stars for now.