Cheeburger Cheeburger is one of the best hamburger chains out there, but you wouldn’t be able to tell by its Great Neck location.

I was perplexed to read an influx of bad reviews on TripAdvisor and Yelp. I figured maybe it was just growing pains, and that a couple months would help them iron out the kinks. But sadly, when I finally visited last week it was one of the worst dining experiences I’ve had anywhere.

Granted, a lot of this wasn’t Cheeburger Cheeburger’s fault. We came to the restaurant on a Sunday night and it was pretty crowded. We were seated by the window, and I got to sit underneath to one of my favorites, Elvis himself. Some oldies were playing on the radio, which I loved. 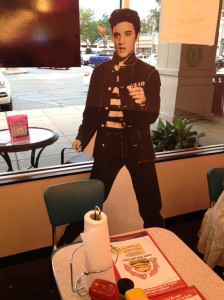 The first annoying thing I encountered was a middle-aged man sitting at the table next to us who insisted on singing the words to every song he knew, as if his wife and daughter and our entire section of the restaurant would be impressed by it. Trust me–we weren’t. Worse, as the evening went on he was a miserable jerk to the poor young guy serving us. He asked for a refill of his Coke and after a minute he started whining and complaining about not receiving it. He asked for his check, and when that took a long time to come, he became pretty vocal. Needless to say, I was very, very happy to see him leave.

The restaurant was really, really loud on account of the many, many kids that were there. That part I don’t mind–I expect a family-friendly place like this to have a lot of kids. But what disturbed me was that families would leave their tables in a terrible mess. Again, not Cheeburger Cheeburger’s fault, but I did notice that the messes would sit for a long time without getting cleaned up.

I hate to say it, but it just struck me that more than a couple of the restaurant’s patrons were generally rude and inconsiderate. In fairness, a lot of this is out of the restaurant’s control. But on the other hand, the management of the restaurant can go a long way in spotting errors early, fixing them, and setting the bar by their own example. That didn’t seem to be happening here.

One perfect example is when we were ordering. Our server was a very, very nice young man but he was clearly given too much to do while other employees seemed to be sitting around and doing nothing. Worse, in the middle of us placing the order, someone I presume was a manager interrupted and told him to do something else. I’m sorry, but I don’t care if you’re a McDonalds or Le Bernadin, that is not something you do.

There is one main dish you order at Cheeburger Cheeburger, and that is of course their Cheeseburgers. You can choose their one-pound (actually 20 ounce) burger for $11.99 that clocks in at an impressive 1694 calories. Finish this one, and you’ll get your picture on the “Wall of Fame”. 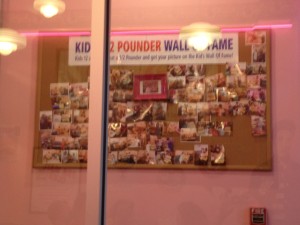 Although don’t be surprised if Michele Obama and Michael Bloomberg come to your house afterward to confiscate all your eating utensils.

Next comes the fun part. You can load your burgers with cheese and toppings. You can only choose one kind of cheese (extra cheese is 75 cents), but you have every cheese under the sun to choose from: American, Bleu, Swiss, Feta, Pepper Jack, Mozzarella, Cheddar, Provolone, or a Jack and Cheddar Mix.

You can then choose from a staggering amount of free toppings. Here, you can choose whatever you want and however much you want of it: lettuce, salsa, guacamole, marinara sauce, Heinz 57 sauce, cole slaw, wasabi powder, tomato, roasted red peppers, chopped black olives, BBQ sauce, chipolte mayo, Grey Poupon, Tabasco, Onions, Pickles, Jalapenos, onion rings, A1 sauce, peanut butter (!), pepperoni, mayo, banana peppers, buffalo sauce, cajun seasoning, relish, or sauerkraut. For a short moment I considered being a smart aleck and asking for one of everything, but I ended up choosing onion rings (you can only get 2), sauerkraut, coleslaw, roasted red peppers, Grey Poupon, and jalapenos. I chose Jack and Cheddar cheese.

They have other things on the menu, of course. If you don’t want a burger you can have a chicken sandwich and get the same choice of toppings. They also have salads, platters, wraps, and a selection of other sandwiches ranging from salmon burgers to turkey burgers, to hot dogs, BLTs, and grilled cheese.

Just as you can invent your own cheeseburger, you can also invent your own shake or malt. You can combine up to three flavors from a list of about 80 flavors, from cherry cheesecake to mocha to apple pie to peanut butter. Lisa went with the straight-up mocha shake, and I have to say it was really, really good.

As for me, I decided to get one of their unique sodas–keeping with their nostalgic feel, they have classic choices from an old fashioned egg cream to a root beer float to flavored sodas. I got a vanilla Coke, which came in a mason jar glass. 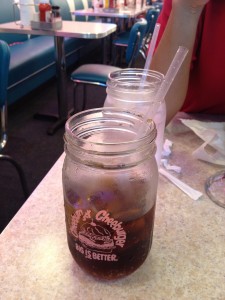 A lot of folks on Yelp were complaining of the time it took to make the burger, but in fairness to the Cheeburger Cheeburger folks the menu and signage do say that they need 15 minutes to cook your burger. So if you go, be sure to allocate yourself enough time. One very cool thing they did was provide Trivial Pursuit cards on every table with trivial from the 1960’s. 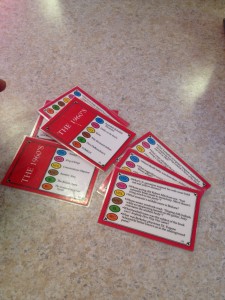 There were also a lot of interesting design details that were interesting to look at while waiting–T-shirts displayed on the walls and old nostalgic signs and ads. The parent company did a great job in everything except perhaps for screening and evaluating their franchisees.

We finally got the burgers. Here was what Lisa’s looked like: 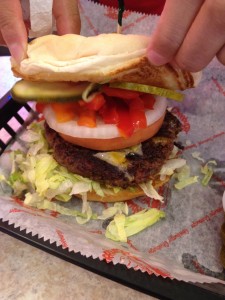 And here was mine. 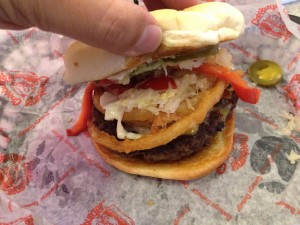 And of course we had to have a bucket of fries and onion rings. 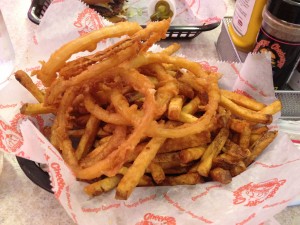 My first impression after biting into the burger was that it was pretty good. Not as good as a Peter Luger burger or even a Shake Shack burger, but certainly better than something you’d find at Wendy’s or McDonalds. The beef was well cooked and had that nice grilled flavor, although it was a bit dry and didn’t have much taste.

There was one thing in particular, though, that left a bad taste in my mouth. Literally. The roasted red peppers were really, really sour. At first I ate a couple, just thinking that it was a taste I had to acquire. But when Lisa ate hers and grimaced, we knew something was wrong. We asked our server if it was normal for the peppers to taste like that, and he told us he’d ask the kitchen and get back to us. But he never did. Other than that, he couldn’t be more attentive, considerate, and friendly to us, so I figured it was one of two things–he was just being worked to the bone (aside from serving us, he had to clean up spills and horrifically messy tables while other employees appeared to be sitting in the back doing nothing to help), or someone in back just told him not to answer the question. Either way, it points back to poor management.

Adding injury to insult, that night both Lisa and I had very, very bad gastrointestinal issues. I won’t go into the grisly details, but suffice it to say that both of us agreed that it’d be a long, long time before we step in again.

Perhaps my experience was a one-off. But I have to say that while I first thought the Yelp and TripAdvisor reviewers were being unnecessarily harsh, now I feel they weren’t harsh enough. I’ll return in a few months to re-review this place, but in the interim I really hope that the management of this store shape things up, as there are a lot of things that are really broken. Up to now, I’d been a huge fan of the Cheeburger Cheeburger brand, but the Great Neck location is giving them a black eye.