Bruce’s Bakery is a Great Neck landmark. Walk into the door and see the wall of famous people and you’ll see photos and letters from sports celebrities, superstars, and presidents. And something else I love about Bruce’s–he’s an unabashed Yankees fan, and has been one since way before it was “hip” to like the Yankees (if you suffered through the 1980s you’ll know what I mean).

If this were a review of the bakery, it’d easily get 5 stars from me. Every time there’s a special occasion like an office birthday party and I need something baked, I go straight to Bruce’s–and get rave reviews. Most of the time I’ll get a cheesecake or a chocolate cake. (Be sure to ask them for something that’s been freshly made–once I got a fruit tart that I realized later had been sitting a little too long).

Every now and then you’ll see something really special in the bakery case. Last Fourth of July, I saw them bring out this one and grabbed it right away. 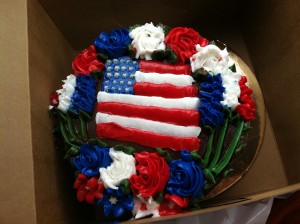 So again, from the bakery perspective, Bruce’s Bakery hands-down gets 5 stars from me. But since this blog reviews Great Neck restaurants, I’ll focus the rest of this post on the restaurant portion.

To get to the restaurant, you do have to walk through the bakery, the scent of which definitely puts you in the mood to eat. The restaurant itself (and the menu) are much like a typical American diner, you’ll find you can order breakfast all day, along with a nice selection of burgers, sandwiches and salads.

After we were seated, they started out by bringing a basket of bread: 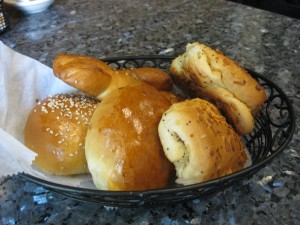 While the bread had a very good taste, it was noticeably stale. But all was forgiven when they brought out their complementary plate of cakes (which I always thought came out at the end of the meal, but for us it came right away). 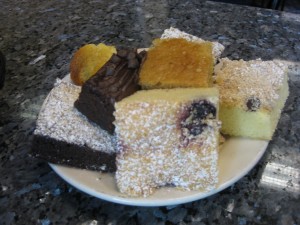 There are coffee cakes and brownies of all kinds. This is by far my most favorite part of Bruce’s. And don’t worry, they do give you a bag to pack up what you can’t eat.

We ordered our food. Lisa went with a mushroom burger. 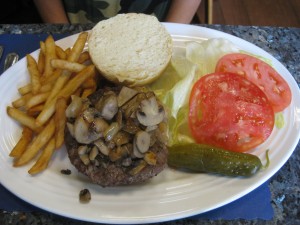 This was pretty standard diner-type burger, generous in the portion size and with a good beefy flavor. When I took a bite, it did seem a bit on the dry side, though.

As for me, I ordered off of their “Garlic Bread Board”. I chose “The Cutter Mill”, which was “served on Garlic Bread with Turkey, Bacon, Melted Mozzarella, Lettuce, Tomato, Onion Ring, and French Fries”. 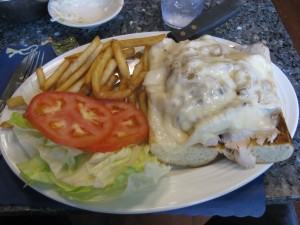 Again, the serving size was quite enormous. Although I noticed right away there was no onion ring.

The sandwich itself was quite bland. It didn’t have much taste, even with the gobs of cheese on it, and the turkey was pretty dry. I was surprisingly underwhelmed by this one.

So overall, I’d give the restaurant 3.5 stars. But let’s end the post on a happy note. Here are some scenes from the championship bakery aisle. 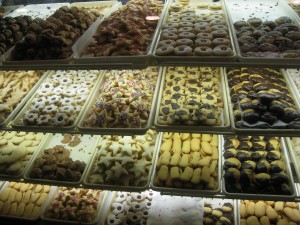 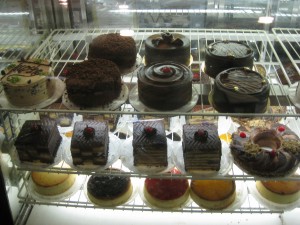