I’ve been so busy there’s a backlog of reviews I have to write. I visited Ayhan’s Shish-Kebab twice over the summer. Here were my impressions.

132 Middle Neck Road has been the location of many restaurants over the years. The earliest references I can find are pictures from a postcard from what I’m guessing were the 1950s or 1960s when the restaurant was a Lauraine Murphy Restaurant: 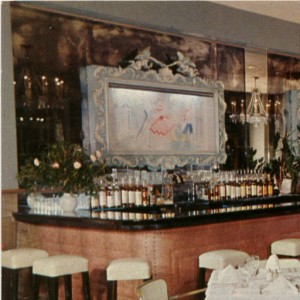 By 1992, it was an Italian restaurant called Pomodoro. A few years later, it was L’Angolo. A year later, it changed to Villa Borghese. The New York Times declared in 2001 that “the curse of the corner” may be lifting with the opening of Luna Caprese. A few months later, the Times announced the opening of Bistro Grill, which spent many years at the location.

In 2012, Great Neck Estates approved Ayhan’s Shish Kebab to take over the location. If anyone’s going to succeed in this place, I gotta believe Chef Ayhan has what it takes. For those who don’t know, he’s the chef behind the 28 Day Mediterranean Diet Plan

, was one of the first to introduce Mediterranean food to Long Island 35 years ago with his first restaurant in Port Washington, and by now has nine restaurants all over Nassau County.

From my first experience there, the answer is a resounding yes.

Lisa and I walked into Ayhan’s at about 7:45 PM on a Saturday. Now we didn’t bother to make reservations, because with the exception of Peter Luger down the road, we’ve never, ever had to wait for a table in Great Neck, even on a Friday or Saturday night. But when we walked in, there were two groups ahead of us.

It took the young hostess a little while to turn around and acknowledge us, but I later surmised that it was just because she was a little embarrassed and flustered that a table wasn’t ready. She told us that there was at least a 20 minute wait. I guess she must have assumed we’d turn around and walk out the door, because I had to ask her “could I put our name on the list?”

There wasn’t really a place to wait by the entrance, so we awkwardly crowded with the two other parties by the front door. I looked inside the restaurant, and I saw there were two ladies who were just sitting there, waiting for what seemed like an eternity for the check. I also noticed that 1-2 couples left while we were waiting, but it seems that for whatever reason their tables weren’t cleared very quickly Turning tables over quickly to make room for customers waiting is of course the hallmark of a successful restaurant, so I hope this young staff can improve over time.

But before I had a chance to get too upset, the manager invited us to sit at the bar and was kind enough to offer us free sodas. This was a gesture I really, really appreciated. In fact, I was really, really impressed by a lot of things the manager that night. Even though the restaurant was so busy, he seemed to keep an air of calm around him, but still encouraged his staff, kept things moving, and took care of and even joked with customers. Managers I’ve seen in other restaurants just sit in the back and bark orders at employees, but he went above and beyond to make sure every guest’s needs were taken care of and that all the young employees had what they needed to be successful. I really appreciated that.

We finally got a seat. The inside of the restaurant is very pretty. It’s a big round room with string lights and hanging plants all around the perimeter. Every table has real candles, and in the center of the room is what looks like a giant bronze watering can centerpiece. There about about 20 tables around the restaurant that seat 2, 4, and 6 people. There’s also a second room in back that I’m guessing is a party room. Even though the restaurant was full, the noise wasn’t too loud, probably because a lot of the patrons were on the older side.

The evening started with warm bread and some yogurt sauce. It was very good bread with a slight crunch. The yogurt sauce was excellent with just the right tanginess, just a tinge of sourness, and an herbal flair.

Now while we were waiting, we’d heard a lot of people raving about the lobster special, so I knew that was what I was going to order. but I did want to get some authentic Mediterranean cuisine (there are not many Maine lobsters in the Mediterranean sea), so I asked for suggestions on the appetizers. The suggestions were the spinach pie or the octopus. I figured I’d go all out and get the pie sampler. 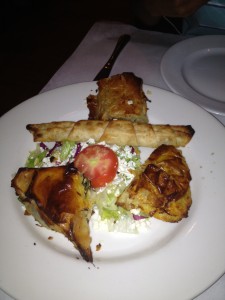 This was an assortment of three different kinds of  pies: spinach, cheese, and meat. The pies were very flaky with excellent flavor. They were crisp on the outside and had a wonderful flavor that kind of enveloped you. I was surprised at how perfectly it was cooked–it was crisp without being burnt. Each had a different personality; the cheese pie had a good, chewy texture, a rich cheese flavor, and wasn’t as greasy as I thought it might be. The meat pie had chunks of ground meat inside, and wasn’t overly seasoned as I’ve experienced in other Greek restaurants that serve it. The spinach pie was very good as well.

Next came out our Greek salads. The lettuce was fresh and tangy, as were the variety of other vegetables, from radishes and olives to celery and shredded carrots. The dressing was a simple olive oil and vinegar with feta cheese crumbled on top. 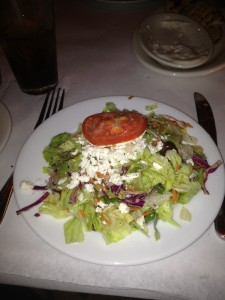 And next, of course, came the lobster. 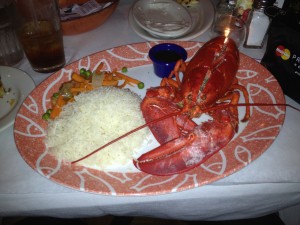 The server positioned the plate perfectly so the lobster was staring right at me, while the manager tied my plastic bib around me and patted me on the shoulders. Again, really nice guy.

I’m not kidding when I say that this was one of the better lobsters I’ve had in my life, and I’ve had a bunch of them from Maine to Boston to fancy-schmancy seafood restaurants from New York to California. It was perfectly steamed and the meat was ample. The rice pilaf and steamed vegetables made a nice complement, but the star of the show was definitely the lobster. I looked around any every table that had the lobster was just smiling ear to ear. 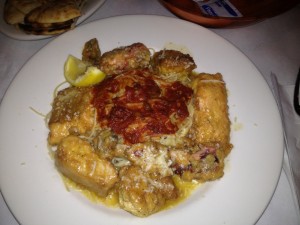 All the seafood (swordfish, salmon, shrimp, and octopus) slightly breaded and fried; we probably would have preferred it grilled, but it was still pretty good.  The angel hair pasta itself was pretty light, with mushrooms and tomatoes. Overall, a decent dish, but I couldn’t help but notice Lisa looking longingly at my lobster through the night.

Don’t worry, I took her back the next week, where we both had the lobster 🙂 The experience was just as nice the second time around, and the lobsters were chunkier and more flavorful than ever. 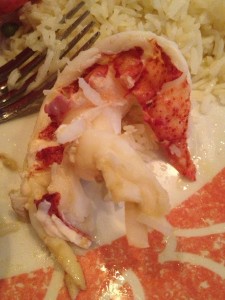 There were slight differences between the first and second visits. The bread was a little different the second time around, but still very good. The restaurant wasn’t as crowded either, but the manager was there and still nice as ever.

While the experience I’m writing about here was was in the summer, I just noticed on their Facebook page that they’re still continuing to have Maine Lobster “while supplies last” as of this writing, so jump on it while you can!